Images from the episode You're Kraken Me Up.

Lumpy looks at Pop and Cub.

You just had to drop anchor.

The Giant Squid (Kraken) is sleeping.

It looks like Russell is good at playing the ukulele.

This is the part where Giggles laughs at Russell.

Is that the route this episode is going?

Russell, Giggles, and the big sea.

A kraken in HTF. Nothing could possibly go wrong.

Do you see that tentacle?

Giggles is dead, but Russell doesn't see that happening.

The Giant Squid places its tentacle in Giggles' head.

The squid in disguise!

"I have something for you."

A heroic kiss for such a good deed... not.

Russell likes where this is going.

Why squids don't kiss with their tentacles. Or so I think.

A cork covering a small hole.

Russell's in trouble! Do something, Lumpy!

Truffles behind the umbrella.

Petunia is about to meet her fate... and it's not the sun blocking.

Petunia, in the middle of one of the funniest deaths in cartoon history.
Death: Petunia

Clearly the severed head is more worth saving than the sea otter who's screaming for help.

Lifeguard Lumpy to the rescue!
Death: Russell (not seen)

"I'm going to save someone!"

Lumpy continues trying to save Giggles.

Giggles (Kraken) thanks Lumpy for such a revival!

That mug must have World's best moose written on the other side.

Did Lumpy not notice the tentacle coming out of Giggles' bed?

How cute, Lumpy is feeding Cub (Kraken) some milk! 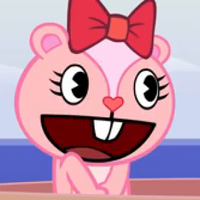 Giggles admiring Russell's ukulele. That is, until the strings break... 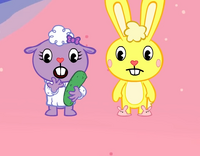 Look at how shocked these two are.
Retrieved from "https://happytreefriends.fandom.com/wiki/You%27re_Kraken_Me_Up/Gallery?oldid=363133"
Community content is available under CC-BY-SA unless otherwise noted.