Start a Wiki
watch 01:48
The Loop (TV)
Do you like this video?
Overview
Gallery
Trivia
Blurb

Images from the episode Wrath of Con.

The bus drops Sniffles off.

The Mole has a surprisingly suitable job.

"How did he know I was here when he's blind?"

"You have your pass?"

You may want to check your pockets. Just in case.

Even Flaky is here.

Splendid is waiting for fans!

Splendid meets one of his fans.

What kind of faulty pen is this?

Or it may have broken under Splendid's super strength.

He doesn't know his own strength, as three unfortunate fans are about to know.

How flicking the tip of a pen can kill 3 people.

For a convention center, this place looks deserted.

"Time to check the time."

A building filled with people and nobody notices these corpses.

Giggles' lightsaber runs out of light.

It's just not the same with a regular old sword.

I guess this is how lightsabers are made.

The force is strong with Giggles.

Petunia's body starts giving up on her.

These things can keep anyone distracted.

This is why real lightsabers didn't sell.

Why would Lifty and Shifty wanna listen to Splendid's speech? Maybe they're planning to rob the place while he's busy speaking or something.

Splendid about to make his speech.

The microphone about to break from Splendid's super strength.

He doesn't know his own strength.

Splendid clears his throat because he now needs to scream out his words.

He also doesn't know his own volume.

Giggles finally died after some stumbling.

If Cuddles and Toothy weren't deaf, they'd hear the screams behind them.

What happens every time Splendid makes a public speech.

Imagine how much worse it would have been if the microphone wasn't broken.

Of course, Splendid survives this.

He was searching for the pass he didn't know he brought.

See! You had it all along.

He's about to witness an even bigger surprise.

A once-in-a-lifetime experience. Unless you're in HTF land.

"Can I have your autograph?"

I wonder if Sniffles is a fan of Ant Man too.

Even in the face of danger.

Okay, one of them is dead.
Death: Sniffles

Poor Sniffles never did get his autograph from Splendid.

The rubble falls back into place to cover up the evidence. 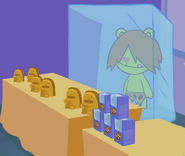 Nutty as Batman.
Retrieved from "https://happytreefriends.fandom.com/wiki/Wrath_of_Con/Gallery?oldid=339948"
Community content is available under CC-BY-SA unless otherwise noted.