Start a Wiki
watch 01:51
The Loop (TV)
Do you like this video?
Overview
Gallery
Trivia
Blurb

Images from the episode Without a Hitch.

"T-there's someone in the distance..."

"Hey! Could you give me a pickup?"

She picks him up.

Flaky and Flippy greet each other.

Alright. What is Flippy searching for, I wonder.

Flaky has to barf.

Flaky sticks her head out of a window because Flippy bought cheese.

Flaky was actually killed by a sign not the car window.
Death: Flaky (First Imaginary)

The car is shaking.

Shot of the lightning striking.

You're doing it wrong.

She has to get it.

"I can explain for not picking you up earlier."

Whats the point of removing her eye if he was going to use her whole body for the new tire?

Probably to punish her for ditching him.

I hope this is another hallucination.

The wheel is replaced!

So I heard you leik seatbelts?

Don't worry, it's a hallucination.

Flippy becomes Flappy. Actually no, he has no wings.

Apperantly, Flippy has just been a little bit drunk lately, and doesn't remember what really happened after the crash.

I bet fans were expecting a FlippyXFlaky moment right here.

He's going to kill me!

Isn't the blood supposed to be black and white?

This reminds me of one certain episode...

I know your in pain and all but is running in the street with your eyes closed the best idea?

Lumpy is too confused to see that coming.

Lumpy slows his truck down.

Considering her injuries, an airbag would kill her.
Death: Flaky (Real Death) 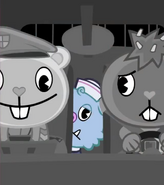 Truffles in Level 11 of Double Vision, which was themed after this episode.
Retrieved from "https://happytreefriends.fandom.com/wiki/Without_a_Hitch/Gallery?oldid=336023"
Community content is available under CC-BY-SA unless otherwise noted.