Images from the episode Wheelin' and Dealin'.

The preparation for the race.

Lifty's and Shifty's cart, which lacks tires and a steering wheel.

The duo should've been prepared.

Lifty has an idea.

Lifty and Shifty preparing for their first act of thievery.

The start of the race.

But no worries, Lumpy has got this under control.

The result of Lumpy starting his tireless car.

The duo in their car with stolen tires.

Handy with extended arms and Shifty without his hat.

Lifty and Shifty are in trouble.

"Haha, you're going to crash!"

Handy feels confident about this race...

...even though he shouldn't be.

Oh no, Handy is about to crash!

Now, Lifty and Shifty are going to win! How are they going to share their trophy, though?

"What was that?". Note: Shifty missing a left arm.

Now they know they're gonna die.

Another one bites the dust. 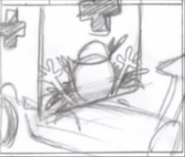 One part of the storyboard of this episode, showing Handy with both hands visibly drawn. 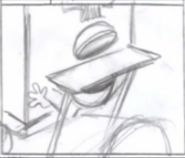 Another part of this episode's storyboard, showing additional carnage to Handy that isn't seen in the episode itself.
Retrieved from "https://happytreefriends.fandom.com/wiki/Wheelin%27_and_Dealin%27/Gallery?oldid=352870"
Community content is available under CC-BY-SA unless otherwise noted.