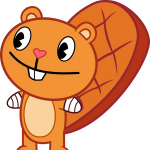 The video that got me into Happy Tree Friends and eventually led me to finding this wiki. Here.

Hi there Anonymous! I am just a random guy helping the community and learning stuff by editing. So far I love it here. If you have any questions, requests or just want to chat you can do It on my wall. I usually start my day by looking at facebook notifications, chat with some friends, watch some YouTube videos and then come to this wiki. I usually read/edit random stuff until I am disturbed by my friends on Skype. After that I edit stuff inbetween matches (We usually play League Of Legends). When I'm not ill I go out for weekend to hang out with my friends. I also travel to another town, Zrenjanin (thus my name). In Zrenjanin I attempt a school, which is why I'm too busy/lazy to edit as much as I do on weekends.

My friends on the wiki

(add yourself if I accidentally skipped you)

Everything is listed in order, thus the top being the best, and the bottom being not as good as the top, but there's not much difference.

Episodes I love the most

For reasons unknown, I have decided to make this list... This was so painful to make :D . Making this list was litterally impossible...

1. Mime: In my opinion he is the cutest character ever made, need to say more?

Failing to not be the cutest.

Introducing the cutest character ever!
2. Handy: You just can't say no to his adorable face, except when you are screaming "nooooooo" after his deaths.

His funniest and cutest scowl.

I'd let him into my house, babysitter or just a random guy.

Flippy why did you do that ;D.
3. Cuddles: Bunnies are already cute and he is the cutest one!

Cuddles is onto something.

Silly little bunny!
4. Petunia: Cutest female character in this show, i love her bushy tail so much!

I love her current profile picture, she's so small and cute.

Poor girl, she's so confused, It's adorable.
5. Lammy: Not much behind after Petunia, she is so cute, I'd love to see her get more screen time. 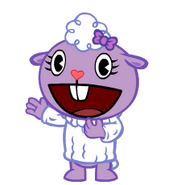 Picture made by HTF1234, she has an amazing talent to draw something like this.

I'm so glad they won Vote and Die.

What's the matter Lammy?
6. Giggles: She is so cute, altough in the past I haven't really considered her to be as cute as I do now.

She was cuter in the early internet episodes.

Some may say creepy, but It's actually cute.

She looks so little.
7. Nutty: He is so cute when he does that energy jackhammer effect (when he is seen skipping). 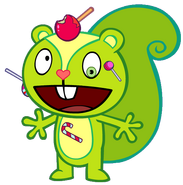 Daaaaaw what a cute little squirrel.

They are the perfect match.

The so called Jackhammer effect.

8. Pop: I am probably the only person on Earth who thinks that Pop is the cutest Bear character in this show.

He is so cute, the cutest bear character in this show.

Pop looks like a good parent in this picture. So cute.

I think it's because of his hat he looks so cute.

9. Flaky: She is so adorable, but I probably would not like to hug her.

Flaky from above, she is so confused.

10. Lifty: It's because he usually does his grin he isn't higher on my list, but my God, Lifty is Shifty without a fadora and he much cuter than him, I don't know why!

He looks youger than Shifty doesn't he (and also cuter).

11. Russel: I have never found pirates to be cute, but I love his whiskars and tail!

The cutest pirate out there.

He is going to grow up like Edward Kenway for sure.

12. Toothy: Beavers in this show are the cutest beavers ever drawn, but I don't like his freckels and his huge buckteeth.

He is so cute when he is confused.

Ditto, but with different face expresion.

13. Splendid: On rare occasions when he smiles and even when he is trying to save someone he is so cute!

I would just run If I were Giggles, but he is too cute to be that scary. 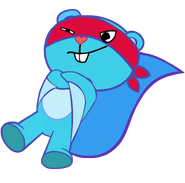 He looks so good in this one.

14. The Mole: I don't care what people think, but Mole is adorable. But he is more funny and hilarious than cute. 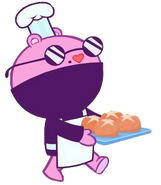 You just have to love Mole, he's so adorable.

What a nice guy, It's not his fault he went to the wrong house.

Cub used to be cuter during season 1 and 2, than he is now.

How cute, Cub is enjoying his day on the beach.

A rare sight of a beautiful interaction between Pop and Cub.

16. Flippy: I really don't find bears adorable, but it's hard to think that Flippy is so cute and innocent after we find his alter ego murdering everybody, but he is infact cute and innocent.

They are both adorable and cute.

17. Shifty: For reasons unknown his fadora prevents him from being as cute as Lifty is.

Shifty without his hat, and already about three times cuter.

He is so happy, and it looks like he has moustache, so cute.

18. Lumpy: The creators of this show didn't intent him to be cute, but there are moments where he is the cutest character from a random group of Tree Friends from time to time. I love when his does that empty headed face.

One of my favourite Lumpy moments.

Lumpy is adorable and I don't care what other people think.

The face of true evil!

19. Sniffles: He is cute only when his mouth isn't showing, otherwise I find him creepy. (adding pictures later) 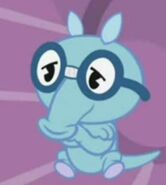 One of the rare pictures when Sniffles' mouth is shown and he looks cute like that.

20. Disco Bear: His looks can probably tell you that he is a character who wants to be more cool than cute, but even that isn't going well from him.

Disco Bear is rockin' in his profile picture.

It's amazing how he did that, he actually looks like a lion now.

21. The Cursed Idol: Although his face is meant to be more scary than cute, I somehow find him cute, but he doesn't do more face expresions which is a bummer (but that's the way he is).

What a cute little Dolly.

22. Fliqpy: He is isn't a character who is supposed to be cute and I don't find him cute in this form, but he makes it up by being funny sometimes.

We sometimes forget that It's the disease, which makes him look like a maniac, but he remains Flippy in hearth.

This one is more hilarious than cute, but It is cute.

23. Mr. Pickles: The only thing I find cute about him are his moustache and his top hat.

Retrieved from "https://happytreefriends.fandom.com/wiki/User:Zrenjaninac?oldid=321029"
Community content is available under CC-BY-SA unless otherwise noted.