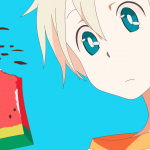 Might as well fix this page up as while I'm doing it...

I found out about MondoMedia indirectly from Maplestory. A good friend of mine suggested playing Maplestory. It was fun, then I, who barely ever used Youtube, went on and did my first search. After stumbling on many videos about the game and the anime, I began watching MMV's. One MMV was of the Vocaloid song "PiPoPi". This was the first Vocaloid song I've ever heard. Some months pasted as I began my Vocaloid fangasms and I watched MMD videos. I downloaded and played with MMD, but quickly got bored of it. Back to the computer, I found one video with an interesting audio. It was from the Mondo Mini Show "Dr. Tran." I watched it for a while and stopped. Then I watched Happy Tree Friends and stopped. The show made me sick, but after a while, it grew on me.

My top ten favorites are:

6: Lumpy- Kind, compassionate, feel bad for all the hate on him.

1: Handy- Tied with Cuddles. I like his voice and the way he mocks his dying friends.

I do draw fan art of the characters but my drawings will rarely be seen on the internet (but you might find ONE picture on my deviant...) I also have a blog for one character but it's so unfinished... I rather not tell ANYONE about it.

Also, most of the fanart I see of the show sickens me. I'm sorry, I tell it how it is. That's why I rarely do it too. Rules? Yes. Use a clear sheet of paper, color it in evenly, if you can't copy Kenn's style, use your own, etc. etc. Along with OCs. If it looks simple and easy to animate, go you! [Rage Face] I tend to lose my temper and be rude... hehe...

You can find me on the DeviantArt, youtube, and other websites but under a different name. Anything else? No? Here's a pony ._.

HOLY SHIT THIS PAGE LOOKS LIKE CRAP. This was, what? 3 years ago? Disregard everything here. I'm not a ponyfag anymore. I'm not any of this crap. Fuck me.

1- Does it look simple? Would it be easy to animate?

2- House cats are off limit.

5- Not every character need a boyfriend/girlfriend.

6- Dafaq is with this full head of hair BS? D.B. only has it for comical reasons. Cro-marmot for a rugged style.

7- Not every character have to look/act/or be in a war like Flippy.

9- They are childish animals, not sex symbols. Please, fandom...

10- TREE FRIENDS! TREE! Try to make them native to a forest unless you're doing the Ka-pow.

Those are my thoughts.

FUUUUUUUUU *contain the rage...* THIS IS ABSOLUTELY GREAT! Y'KNOW? NOW WE CAN'T SHARE OUR OPINIONS! I guess it's for the best... *nnn* THANKS PEOPLE!!!

Retrieved from "https://happytreefriends.fandom.com/wiki/User:Tanzialana?oldid=98998"
Community content is available under CC-BY-SA unless otherwise noted.