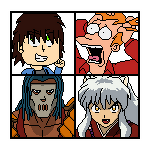 Okay, I didn't like HTF at first. I first found it at a young age, around 2007. I witnessed Toothy's Smoochie while watching Doodlez (short series that used to air on Nicktoons). While me and my parents enjoyed Code Monkeys, a crude and off-color show in general, I just didn't like a show about cute little animals dying.

All that changed in 2014 when my sister discovered the show on Netflix. I objected to it at first, but upon watching the series, I found one of my new favorite shows. When I began watching Adult Swim shows in 2016, I rediscovered my interest in HTF. Now, in 2018, I became a big fan of the show again.

And in case you're wondering, my favorite characters are Handy, Nutty, and Lifty and Shifty.

I plan to get Flash in the future to make my own HTF animations.

Retrieved from "https://happytreefriends.fandom.com/wiki/User:RMaster007?oldid=334345"
Community content is available under CC-BY-SA unless otherwise noted.