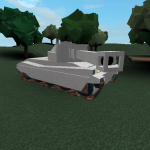 "This good ol' tank has been fighting those commies ever since it was first used."

"The Portuguese goons won't last when this comes out to fight."

The M98 McCormmick became a main battle tank of the USCPF following the start of the second American Civil war. The tank was designed after late 1950s and early 1960s US tanks for their rather cheap and reliable designs, making them easy for the US to mass produce during the war.

Retrieved from "https://happytreefriends.fandom.com/wiki/User:M98_McCormmick?oldid=317778"
Community content is available under CC-BY-SA unless otherwise noted.