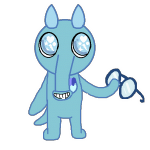 Hey everyone! My name is Bonnie, and I hope I will make some friends on this wikia! I love Htf (scratch off the violent part, please don't hate me for this... just respect my opinion

My favorite episode and least favorite

My favorite episode is "Clause For Concern" (not the post credit scene) because no one died and it gave me a very nice feeling when Cub popped out of the bag laughing, I hope they'll do more episodes like this one.

I also like "Idol Curiosity" because it could easily be edited to be a very nice, entertaining and adventurous story but without all the deaths, instead the Idol just slightly injuring the victim (E.g Giggles just tripping and falling or Toothy just spilling the drink on himself).

I hated the episode "Wrath Of Con", not only was it rushed like heck, it damaged one of my favorite shippings, the Splendles, aka Sniffles and Splendid (I only ship them as friends)

As if my point of view on those 2 wasn't almost dead already (I just saw a humanized anime video comic thing called "tea party", where Sniffles drugs and injects some substance into Splendid's body.. It really was horrible) this episode just gave it the kiss of death....

Then there was "Wishy Washy", who's forced and unnecessary as heck

Not to talk about "Tongue In Cheek", because ...you know, seeing your favorite character mutilate himself and crying isn't the thing you want to see.... The fun part is that when I first saw this episode i had just finished eating...

I don't pair Lammy with anyone since I picture her as a tomboy (yes,her, not Flaky)

(If you don't like those shippings, I respect everyone's opinions, just as long as you respect mine)

(NOTE) Those are made by me on MS Paint, and are NOT OFFICIAL IN ANY WAY

Also they are in no specific order.

I did not do the bonus minisode, as it doesn't count as an episode, if it does, let me know, and I'll do that too.

My other HTF fanart

I know I didn't sign some of these, I forgot,

And in case you're wondering why I signed some with "Lucy", that's because it's my second name. (It's Lucia, but I prefer Lucy)

Also I apologize for the lack of gore, but, as I said before, I hate violence and gore and wish to stay as far away as possible from it (I like everything HTF related, except the gore, I know gore's like the heart of the show, but, I really can't help but enjoy htf, minus the gore)

Retrieved from "https://happytreefriends.fandom.com/wiki/User:IloveHTF?oldid=278063"
Community content is available under CC-BY-SA unless otherwise noted.