Hey Anonymous, I am HappyTreeSponge, the guy who is an cartoonist (Kinda) and loves crossovers. I like to watch SpongeBob SquarePants and Happy Tree Friends. I like Fliqpy, Nutty, Toothy, Pop, Sniffles, Cuddles, Disco Bear, and Handy. I'm also a fan of Lumpy.

I'm a huge fan of Happy Tree Friends. It is a great show I love and it's very unique. The characters caught my eye and I gotta say, they are pretty adorable. Too bad that they barley make episodes anymore. However, I create my own animations and artwork to continue the legacy of Happy Tree Friends. It's a weird series. The series in question is called "Gory Toons", The series itself is basically HTF but... with a twist. Basically, it's a crossover. It's very weird but producing the episodes are quite fun. I'm quite the fanatic, as I seen all of the episodes, made several creations on the series, and am heavily affiliated with the fandom. In my spare time, I listen to music or watch some YouTube vids. I love all who spread the joy around the HTF fandom and they are also to thank for keeping the show alive. Still Alive! No? Sorry. Out of all of the characters, I love Nutty and Lumpy the most. It's something about their designs that makes them so appealing and how they are so adorable. It's also their buffoony personalities and clumsy mindsets that really earned my affection. Of course, the characters themselves are very complex. It's how deep the show takes it, with the various mental disorders, complex relationships, and fantastic character distinction. The deaths are also a charm. The carnage that the show thrives on is very unique, and quite gazing. It has some of the most creative deaths out there. For who has the worst deaths, gotta agree with virtually everyone ever: Sniffles. However, for the others, Petunia and Lumpy are behind Sniffles. Lifty, Shifty, and Cub are also particularly favorable victims the show love torturing. I love the four primary characters a lot. Cuddles is mischievous, Toothy is sensitive, Giggles is attractive, and Lumpy is stupid. Cuddles is practically the main character, as he's the most advertised and appears in a lot of episodes, way more than others. Lumpy is either the Randy Marsh, Homer, or Tom to Cuddles' Stan/Bart/Jerry. Toothy seems to be the deuteragonist, as he tags along with Cuddles on his adventures and seems to be the secondary mascot of the franchise, next to Cuddles and Lumpy. Giggles seems to be the love interest. Pop is also one of my favorites, probably my favorite out of the non-primary characters besides Nutty. It's his expressions. He's goofy, and is a total drama queen. He's the best protagonist tbh. So overall, I love the show. It's certainly one of the best cartoons out there.

For other info about me, I am quite a shifty individual. You can talk to me anything! I won't bite! I like to draw, make some crappy animations, or have myself a time.

What I'll do for this wiki

Stuff I'm a fan off

A perspective of every character's deaths

A perspective of every character's significance

Ranking of characters and ships 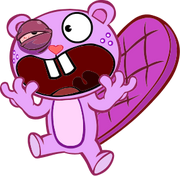