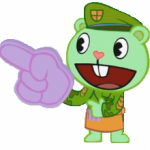 1. Flippy, I love him because he so cute. He's like to kill everybody if something's remember him to war but         not all things.

2. Lumpy, i love him to. He funny and stupidly haracter. But i love him, he is different character not like other     character.

3. Pop, i know he careless but i love him. He very love his son, but always kill him because he careless.

4. Flaky, i love Flaky because her always nervous. I love her nervous laugh, and she coward, i love if her           scared with chick.

Retrieved from "https://happytreefriends.fandom.com/wiki/User:Fire_destructions?oldid=88879"
Community content is available under CC-BY-SA unless otherwise noted.