Images from the episode The Way You Make Me Wheel.

And I know who.

I hope he's doing something safe...

No, this is Lumpy after all.

What on earth made him think that's a good idea?

He's going right for them!

I hope everything will be okay.

He tries to turn.

Lumpy, I suggest you put that razor away.

Yeah, the ducks are okay.

That's what you get for shaving.

Uh-oh. He can't see anything.

Lumpy turns something on.

One of Lumpy's acts of stupidity.

Knowing HTF, nothing good will come out of this.

The tire hits a bump in the road.

I know who that is too.

It's our favourite beaver worker, Handy!

Lumpy is pleased to see Handy.

Who knows how Handy is able to do that?

Then he notices his blood.

For a handless beaver, Handy's great at mending vehicles!

Handy has done his work.

Maybe you shouldn't drive a car when you've lost most of your blood?

That is one satisfied beaver!

Lumpy, you shouldn't do that!

"Why me? I only helped Lumpy!"

Handy's tail gets caught by the tire. 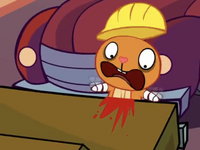 He's getting pulled down. 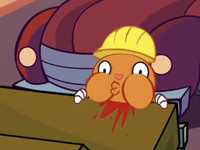 As cute as he looks, this is nasty when you realize his guts are stuffed in there. 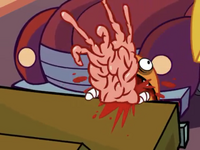 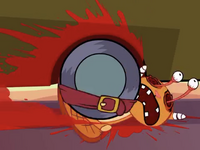 Handy has become one with the tire.

Dead Lumpy and the ducks swimming in his blood.
Death: Lumpy

The duckling found the cause of Lumpy and Handy's deaths.
Retrieved from "https://happytreefriends.fandom.com/wiki/The_Way_You_Make_Me_Wheel/Gallery?oldid=363025"
Community content is available under CC-BY-SA unless otherwise noted.