Start a Wiki
watch 01:48
The Loop (TV)
Do you like this video?
Overview
Gallery
Trivia
Blurb

Images from the episode Spin Fun Knowin' Ya.

The kids are playing in a merry-go-round with Lumpy.

Goof #2: Giggles' left ear is purple (only shown from behind).

Toothy should be holding on better.

He starts to speed up.

Toothy let the bar go, half a second before he panics.

A split second before he hits a tree.

And apparently his buckteeth too.

Giggles holding onto the merry-go-round.

Make sure to hold on tight to the detached bar.

At least he didn't lose his grip.

A split second before getting killed by the 747 engine.

Cuddles' ears before they are shredded along with his body.
Death: Cuddles

Goof #12: Severed hands fly out, even though they're still stuck to the merry-go-round.

His eyes are closed but he should have heard the screams.

And where did Cuddles' hands go?

What? Oh, there they are. 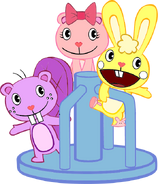 Cuddles, Giggles and Toothy spinning on the Merry-Go-Round! (Goof: Giggles' head mark is missing and Cuddles' cheeks are white instead of pink).

A GIF image of the 360 degree spin of the merry-go-round.

Differences between this episode and Blast from the Past.
Retrieved from "https://happytreefriends.fandom.com/wiki/Spin_Fun_Knowin%27_Ya/Gallery?oldid=334327"
Community content is available under CC-BY-SA unless otherwise noted.