Images from the episode Snip Snip Hooray!. Note: All images are put in order.

Because today he's going to get a haircut!

Pop seems to be happy too.

"Time to get a haircut!"

"So many nice things!"

"Why can't I touch these things?"

Pop's being responsible?! What's next? Is Flaky going to go sky diving or is Splendid actually going to save someone?

Now to take off the beanie.

It's harder than it looks.

Don't worry, it's for comedic effect.

I don't think Pop having those scissors is any better than Cub having them.

How can he be happy with an injury like that?

Cub and his lollipop.

Pop is happy too.

Pop wonders where his razor is.

Another injury for Cub.

"Let's turn off this shaver!"

Pop turns off the shaver.

"Let's try to put that skin back down."

What do you expect from a baby?

The face says it all.

Cub having his mouth and throat shaved.

At least he finished the haircut. 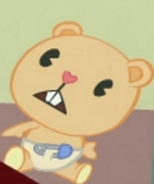 A close up on the picture of a young Cub.
Add a photo to this gallery
Retrieved from "https://happytreefriends.fandom.com/wiki/Snip_Snip_Hooray!/Gallery?oldid=320594"
Community content is available under CC-BY-SA unless otherwise noted.