View source
watch 02:24
Wiki Targeted (Entertainment)
Do you like this video?
Play Sound

Sniffles has built numerous inventions and a few experiments which, most of the time, lead to the death of himself and others. He has made a few inventions to catch The Ants, but they always find a way to manipulate the contraption's mechanism to make it work against Sniffles, which results in his death. His inventions usually border on "Science-Fiction" and "How could you even build that?!" An example is his building a rocket out of a totaled school bus. He can be considered a true genius because most of his inventions work incredibly well, despite going against most logic.

This is the very first invention Sniffles has built within the series. Seen in Happy Trails Pt. 2: Jumping the Shark, Sniffles made it out of an old school bus and a tree to escape a deserted island. As he, Handy, and Flippy threw out Lumpy, however, they began flying out of control until they crashed into the sun. This is one of Sniffles' more extraordinary inventions-for one, the rocket's material could withstand the pressure difference in outer space, and was strong enough to get at least close to the Sun, and it was only made out of a school bus and a tree. Another testimony to his genius is how he used the Petrol/Diesel in the bus to power the rocket. In reality, rocket fuel (such as thermite) is needed to power modern space rockets, and they still aren't remotely as powerful as the one Sniffles made. However, it should also be noted that he clearly didn't include any way to stop or even really control the rocket, which lead to all the passenger's demises.

The rocket Sniffles' fashioned from a School Bus, and a palm tree.

The interior of the rocket.

The rocket flying its passengers into the sun.

This machine was created in Suck It Up when Sniffles was sick, and couldn't reach the ants because his nose was stuffed up. So he made the suction machine to put over his mouth so he could suck the ants in. Unfortunately, the ants reversed the function, causing Sniffles to get sucked inside out. This invention is far more peculiar because the air sucked in/out, needs to be sucked out/in again from somewhere else, and, even though Sniffles was pulled through it, it had to be away from Sniffles to function.

The sheer power of the suction machine is displayed by effortlessly holding on to this bowling ball.

Oh no, something went wrong!

Sniffles' machine even sucks up its user.

Seen in Sniffles' Science Smoochie. When Sniffles uses it, it is so strong it rips both his arms off, causing him to bleed to death; from this, a conclusion can be made that not only did the jetpack have significant thrust to get at least itself off the ground, that the thrust was so great and the straps were made stronger than Sniffles' body structure, meaning he was torn up instead of the straps snapping. It falls down after it runs after fuel and crushes his body.

This, the giant magnet, and the growth formula may not count as inventions because Sniffles just found them. Contradictory, it is possible that Sniffles may have created them earlier and then presented them in his Smoochie.

Also seen in Sniffles' Science Smoochie, Sniffles picks up the magnet, which immediately ends up around his torso due to its strong magnetic pull, which attracts several metal objects to its path. Sniffles is hit with a heating iron, several nails, impaled in the eye by scissors, and killed when an I-beam hits his back. Lastly, the magnet attracts a bicycle. The giant magnet seems to have a strong magnetic force being able to attract objects from a certain distance away.

Also seen in Sniffles' Science Smoochie, it makes things grow in size. How the growth formula allows an item or organism grow to multiple times its original size is a little mysterious. A small drop from the test tube was capable of multiplying the size of an apple drastically, to at least twice as much as Sniffles' height. Sniffles ingested the concoction, hoping to grow enormous. However, drinking it made his stomach grow larger than his body and larger than it could fit in the screen (thus, crushing him). It would have been wiser for Sniffles to pour the formula on his body, as opposed to ingesting it.

The growth formula as it appears in Sniffles' Science Smoochie.

The effect of the growth formula after being ingested.

Sniffles invented the time machine in Blast from the Past, as means of going back in time to stop himself from spilling a glass of milk. He got the idea when he rewound a movie he was watching (Back to the Future). He used a washing machine and other spare parts (such as a lawn mower motor) to build it. After its completion Lumpy ran to get Sniffles because Toothy was hurt on a playground, so Sniffles used his time machine to prevent Toothy from being injured. Unfortunately, thanks to a series of mishaps, Sniffles causes Toothy, Cuddles, Lumpy, and Giggles to die several times. After giving up and dismantling the playground entirely, Lumpy, Cuddles, Toothy, and Giggles go through the events of the pilot episode (Spin Fun Knowin' Ya). With the help of his time machine, he also started the rivalry between ants and anteaters by eating an ant in front of a prehistoric anteater. At the end of the episode, he gets crushed by his time machine being operated by a version of himself from the past. The past Sniffles has no knowledge of what occurred prior to his arrival and follows Lumpy to a new cycle of death.

This is one of several occasions when Sniffles ignores common sense (simply cleaning up the mess and getting a new glass of milk).

The exterior of the time machine, a converted washing machine.

The interior of the time machine, note that control lever in the center. 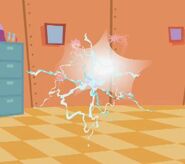 The time machine is use, with a static effect.

If you're wondering about that blood stain under the machine, this explains it.

Sniffles is seen holding this large, glowing green carrot in Aw Shucks!, alongside fellow competitors Mime, Nutty, Handy and Lumpy. Shortly after Lumpy's victory, Sniffles along with the rest of the fairground patrons are killed when Lumpy's corn begins popping. 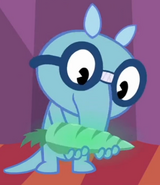 The ant robot was seen in Tongue in Cheek. It was used to infiltrate the ants' home. It was equipped with saw blades, pincers, and drills. It was controlled by Sniffles with a mind control helmet. The robot destroyed the anthill, but met its end when it stabbed an electrical socket while trying to get the ants, shutting down the robot ant and electrocuting Sniffles.

This device was also seen in Tongue in Cheek as an attempt to get the ants. It consists of two helmets, one for Sniffles and a small one for the ant robot. It can control both robots and living organisms. Sniffles controls the little helmet through his big one. After the destruction of the ant robot, however, one of the ants reprograms the helmet (which was the simple task of switching the wires) so he can control Sniffles from his helmet. The ant then tortures Sniffles before killing him. Even though they can't control their actions, the victim is still conscious of what they are doing as Sniffles cried, whimpered, and screamed as he went through his ordeal. What is interesting is to note that Sniffles had not only made a perfectly-functioning mind control system, which is incredibly difficult to achieve due to concentration problems, he had also (albeit, by accident) created a mind control system for a living organism, which, under real circumstances, is not possible.

Sniffles created this in an attempt to save Giggles in I've Got You Under My Skin. It can shrink down and fit inside someone's body, shrinking when the pilot turns a knob on the control panel. This knob slowly moves from a picture of a small machine to a large machine, indicating how much time the pilot has until he is enlarged again. He meant to go inside Giggles' body, but he was accidentally and unknowingly injected into Lumpy's body instead. It has an electric rod which he uses to vaporize germs. The machine expanded to full size inside Lumpy's head, killing Lumpy when his face exploded, and the electric rod impaled Giggles through the head and disintegrate her brain. When Sniffles was crawling out of the machine he accidentally reset the controls with his foot, making it shrink when he was half way out, cutting him in half. It is most likely a parody of The Fantastic Voyage.

The shrinking submarine (note that its structure resembles Sniffles' head).

The interior of the submarine.

And for some reason, Sniffles doesn't shrink with it.

The drill is a digging machine used to dig underground. It is used in A Hole Lotta Love to rescue Cub who was supposedly trapped down a well. The machine was poorly built, partially due to Pop's interference and partially due to a bad design. For example, a small glass dome was built on top of the machine, outside of the drill's range, resulting in the destruction of the dome and the popping of The Mole's head. The machine caused the deaths of The Mole, Petunia, Cuddles, Sniffles, and Lumpy. The drill mechanism on the machine was immensely powerful, it was capable of staying stationary and revolving the entire machine, with passengers.

This is another instance where Sniffles ignores common sense (he could have gone down the well himself to rescue the apparently trapped Cub).

The exterior of the drill machine, about to tunnel.

The interior, front of the drill machine, with a dashboard.

A metal, "paper" airplane with an antenna, that is operated via a remote control as seen in A Sight for Sore Eyes. Its edges are sharp and can cut one's eyes if it flies close enough. Despite being activated and operated by a remote, the plane can fly on its own for great distances, continuing to do loops and fly in circles. It has small (unseen) thrusters that propel it through the air at high speeds, and is even strong enough to use a kite string to shred Nutty.

This strange "animal" is created by Sniffles in Pet Peeve, from the result of a chemistry experiment. It seems to be made of an acidic substance, because its slime can burn through various surfaces, from skin to concrete. While usually friendly and bearing pet-like qualities, it hisses if agitated.

Sniffles with his blob.

Sniffles is seen with this object in Camp Pokeneyeout, when he and Toothy were flinging rocks at Cuddles. It basically works like a regular slingshot, yet it can launch multiple rocks or other things at once by turning a crank.

In Dream Job, Sniffles wears this on his head and has its wires connected to a TV. Unfortunately, all goes awry when Lumpy changes the channels. As a result, Sniffles' dream turns into a nightmare as he is killed and injured through the episode.

Another invention that didn't go so well. Why am I not surprised?
Community content is available under CC-BY-SA unless otherwise noted.
Advertisement