Start a Wiki
watch 04:21
The Loop (TV)
Do you like this video?
Overview
Gallery
Trivia
Blurb

Images from the episode Ski Ya, Wouldn't Wanna Be Ya!

Wheeeeeeeee! That hill was big!

Two friends about to be annoyed by Disco Bear.

Disco Bear about to go to Giggles and Petunia.

The ski lift is a good way to go to the top of high mountain.

I don't think Flaky wants to use it.

Flaky realizing that her scarf got tangled around the hand rail.

She lost her skis.

Are you trying to survive, Flaky?

She probably needs food and water.

Yes, try to pull yourself into the seat.

She is really strong!

That is really high!

...and the night again... (it continues two more times)

What time is it? 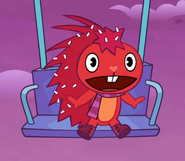 I said slowly and carefully!

Flaky in the snow.

Yep, no food or water... for four whole days.

The Sputnik 1? Where's the "hammer and sickle"? 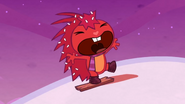 Flaky and the branch.

Flaky trying to grab the branch.

What's with her arm?

She's realized that she has problems with her arm.

Oh! That stone caused Flaky to fall down.

That board is really strong.

Flaky has realized something terrible.

Her scream caused an avalanche.

Flaky is so scared! I understand her.

Flaky before death and before cryin'.

"I must do it to save myself."

Flaky should see a dentist.

"This is behind me now."

This house can really help Flaky.

And before he eats...

Flaky cubes! I want one!

This is why you close your door...

So pesky avalanches don't get inside.

Everything was destroyed by the avalanche.

Do you see Giggles' bow in this image?

You think Disco Bear is safe?

I beg to differ.

Well, that was unexpected...
Death: Disco Bear, (Giggles and Petunia is offscreen) 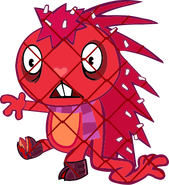 Flaky sliced in pieces by Disco Bear's fence, as seen in this episode
Add a photo to this gallery
Retrieved from "https://happytreefriends.fandom.com/wiki/Ski_Ya,_Wouldn%27t_Wanna_Be_Ya!/Gallery?oldid=334336"
Community content is available under CC-BY-SA unless otherwise noted.