Shifty when first created by Rhode Montijo. Originally, he was a squirrel.

Shifty as he appears in a sketch that ended up being used for Mime's Smoochie instead of an episode.

An updated version of Shifty. He was replaced by a raccoon.

Lifty & Shifty showing affection for each other.

Lifty & Shifty, ready to go down the chimney.

Shifty without his hat in Sea What I Found.

Lifty and Shifty looking at a pizza.

Disco Bear's not the only one who can dance.

A rare moment of brotherly love between the two.

Even Lumpy would know this can't end well.

Lifty & Shifty preparing for something.

Shifty with two bags of money.

Shifty has a bun.

Shifty before death in Sea What I Found. 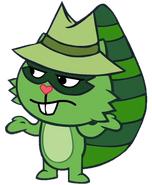 Shifty shrugging, from the episode Easy For You to Sleigh

First appearance (starring) and first death in one.

Shifty burning to death in Sea What I Found.

The result of grabbing the axle of a moving vehicle.

The duo discuss the car's lack of wheels and a steering wheel.

They got an idea.

The start of the race.

The duo in their car with stolen tires.

And fixing it to the car.

Retrieved from "https://happytreefriends.fandom.com/wiki/Shifty/Gallery?oldid=355827"
Community content is available under CC-BY-SA unless otherwise noted.