Images from the TV episode See What Develops.

I can't read the pages from here.

Lumpy on his way to work.

The boss has arrived.

"Give me some gossip."

"How about gossip about him?"

"He likes making a mess."

"Who shall I send out to take photos?"

Maybe him. After all, he's Splendid's biggest fan.

"I've made my decision."

Instead, he chooses the guy who can't even save water.

"Don't come back until you bring me something juicy."

I wonder what Handy just built there.

Oh, it's a supermarket.

Giggles is the very first customer of the new store, and she already has her own fans.

"This will go great with my hat collection."

Russell with a "safe" weapon.

The Mole adjusting his view.

It's ironic alright. Like how he got this job.

Stupid Mole, your camera is backwards.

The employees of the grocery store, giving off big smiles.

A rare moment of Disco Bear flirting with Flaky.

Sorry to rain on your parade...

...but your automatic door's defective.

It's not a camera, but it acts like one.

Can someone please tell me why he's shrugging?

Too bad the automatic doors are malfunctioning.

I'd be more concerned with the fact you're trapped in a slowly flooding store.

Mime loses control of his unicycle.

It's time to rescue Mime, but first to find a nice spot to change.

Look, it's the telephone cabin!

Who could Cro-Marmot possibly be calling? And how could he even answer the phone?

"You've got some nerve."

Mime blinded by the flash.

Who put that ladder there?

This won't save him for long.

Guess it took Splendid quite some time to notice the second phone booth.

Hopefully that photo booth will break his fall.

At least he knows how to change the film right. In theory.

Now which of these is the film?

Hanging by a limb, or rather, a tooth.

Splendid's up for the save!

Too late for Mime.

Splendid nearly has a heart attack.

Handy's got a strong upper jaw. He is a beaver, after all.

Splendid hides in a dark alley.

Splendid while he's screaming is so cute!

Splendid looks at us for help.

Splendid can't decide who to go to first.

It really is no contest who to save here. The guy whose about to die!

Can't hold on much longer.

Splendid makes his decision though it may be to late.

Splendid zooming to the rescue.

I'm calling bullshit on Splendid not being fast enough to save Handy.

Splendid has a thing against yellow vehicles.

"Now to kill whoever is in this car."

Time to destroy the evidence before The Mole takes a photo of it.

"What is this?"
Death: Petunia

That's either The Mole, or an innocent by-stander about to beaten mercilessly.

Spoiler alert: It's the latter. 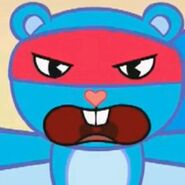 There's the guy you want.

Splendid about to fly after him.

All that remains of Toothy.

...causing the window to crack.

The water being released.

Here goes the grocers being flooded out.

Nutty has been flooded out as well.

Hopefully nobody was inside this thing.

Told you he flew too fast.

Was this purple building here before?

Splendid opens the elevator with his bare hands.

The moment of truth.

Could this be the end of Splendid the super squirrel? 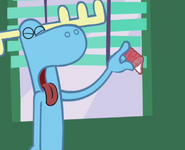 Splendid's had too many mints lately.

Must hide the evidence.

Splendid is set to "destroy" mode.

Poor Cuddles, he was so close to surviving.
Death: Cuddles

"Which do I choose?"

"Who am I kidding? They all suck."

Looking at the film of flesh.

Time to get it developed.

Careful not to expose it to light.

And the secret is safe, thanks to The Mole sacrificing his job.

The irony of this scene was that it's the only good photo The Mole took, and he's the one who ruined it.

What a ground-breaking story that would have been. Could have saved many lives.

Is that Splendid or Clark Kent?
Retrieved from "https://happytreefriends.fandom.com/wiki/See_What_Develops/Gallery?oldid=335795"
Community content is available under CC-BY-SA unless otherwise noted.