Start a Wiki
watch 00:18
The Loop (TV)
Do you like this video?
Overview
Gallery 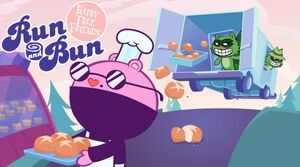 Run and Bun is an arcade game based on Happy Tree Friends. It is available on it's original game server, Mondo Media's website and Amazon Store.

Lifty & Shifty have stolen Mole’s freshly baked buns and it’s up to the Happy Tree Friends gang to help get them back! Collect as many buns as you can while avoiding dangerous obstacles along the way.

This arcade game involves Lifty and Shifty stealing bread buns from The Mole, in the same vein as Buns of Steal. It is set to feature 6 characters (Lammy, Disco Bear, Cuddles, Handy, Mime, Flippy) who all have different vehicles. There will also be different levels, each with its own unique obstacles and traps to watch out for and avoid. Keep an eye out for special buns! You never know what weird and strange powers they will enable you with.

Before you begin your game, you may choose one of the six characters (the default characters are Lammy and Mr. Pickels) and levels (the default level is The Park). Once you're done, click Play.

The objective of the game is to help your character collect The Mole's stolen buns while avoiding dangerous obstacles. Throughout the level, your character can only jump or fly when you tap/click the game area, depending on the character. You can also use power-ups by tapping/clicking the power-up to give you a momentary boost. Collect as many buns as you can to unlock more characters, stages, and power-ups.

The obstacles in the game depend on the level.

Lammy and Mr. Pickels use a small airplane, which is easy to control due to it being able to fly. You can avoid most obstacles with it, if you're careful enough. Favourite level: The City.

Disco Bear wears roller skates, restricting him only to the ground. So, tapping/clicking the game area will only make him jump. However, that doesn't mean he only jumps once. You can make him jump in mid-air, much like how you control Lammy's flight. But he has a fixed jumping height, so you have to be careful. Favourite level: The Park.

Cuddles uses a skateboard, and like Disco Bear, he jumps instead of ascending slowly to the air. The only difference is that Cuddles' starting jump is higher than Disco Bear's, but his mid-air jumps are rather short. Favourite level: The Cave.

Mime uses a unicycle. Like Cuddles, Mime's starting jumping height is high (about half the screen), but his mid-air jumps are short. Favourite level: The Amusement Park.

Flippy uses a jetpack, making the only other character that requires holding down the mouse button or your finger to keep him on air, after Lammy. The only difference from Lammy is that Flippy is considerably faster to take off and is heavier, as he isn't as floaty as Lammy. Favourite level: The Jungle.

Run and Bun is the first of the HTF arcade games to use the in-game store feature, which accepts buns that you collected throughout the game. The following are the items that can be bought in the store, which is always shown before you start the game as part of your preparation.

In the beta version, only Lammy and Disco Bear were available.

In the beta version, only the park and the city levels were available.

These items serve as powers that can be equipped, as the actual power-ups are already present in the levels. You can only equip three at a time. An equipped power-up can only be used once, though, so you have to buy it again if you want to re-use it.

In the beta version, this section was inaccessible.

You cannot make a purchase in this section if you're playing this game oMondo's site. Unlike other store's sections, this one uses real-life money.

In the beta version, this section was inaccessible.

Retrieved from "https://happytreefriends.fandom.com/wiki/Run_and_Bun?oldid=322921"
Community content is available under CC-BY-SA unless otherwise noted.