Pop and Cub in the TV intro of every episode.

Pop and Cub in Winter Break.

Pop almost throwing a ball, as seen in Havin' A Ball. 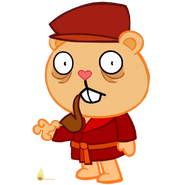 This face screams, "Why does this keep happening?!"

Hammocks are the greatest.

Pop's got something for Cub.

Water Way to Go, with the roles reversed.

Pop is proud of his parenting skills.

Pop socializing with other characters.

Pop smiles at his dead son.

Something bad will be happen!

Pop in his Smoochie.

Pop likes himself some Tetris.

(Possibly) An early design of Pop.

Pop with his son Cub in Ipso Fatso.

Pop is bad with parenting but he's a professional at Christmas decorations.

Pop hates Splendid because of what he did to Cub in It's a Snap.

Pop after eating a cob of corn.

Pop gets drenched in soda

Pop likes hot-dogs. That's not a hot-dog he smells though.

Pop has seen Cub injured so many times that doesn't even bother trying to get him to stop screaming.

Look at that face!

I think you cut something, and it definitely wasn't a hedge.

We all know that parent.

Pop after an unsettling encounter with Disco Bear.

Pop at a fuel station in a DVD menu.

Pop wants to get Cub some ice cream.

One wrong step led to this.

Killed along with Cub

Dead from carbon monoxide poisoning, a scary way to go.

They have no respect for the dead.

Headshot by a flaming pinecone.

He and Cub suffer the same death again.

Cub's enjoying this... Pop not so much.

Cub causes Pop to die this time around. 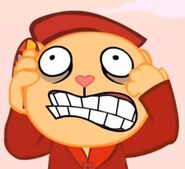 He was so young.

Pop can be ornery whenever his son's life is at stake.

Retrieved from "https://happytreefriends.fandom.com/wiki/Pop/Gallery?oldid=335869"
Community content is available under CC-BY-SA unless otherwise noted.