Images from the episode Pitchin' Impossible.

Goof: The shadow on the wall has just one bottle instead of three.

Petunia playing at Lumpy's stand at the carnival. (Note: Petunia is missing her eyelashes.)

Petunia about to throw a second ball. The Mole can be seen in background.

The Mole hears something.

The Mole with his money.

Lumpy making sure about The Mole's blindness due to his appearance.

He is surprised that the contestant is blind. 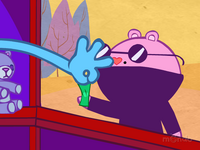 Lumpy giving The Mole balls, despite the fact that The Mole is blind.

The Mole about to throw a ball.

The ball's gone out of control!

That ball looks so fast. Petunia before she becomes nervous.

The left one is broken.

Now the right one.

Petunia's scream before her death.

Goof #11: Petunia's head is sliced in half, even though the wall was clearly suppose to slice her from the chest.
Death: Petunia

The Mole throws the second ball.

The lever controlling the Ferris wheel.

Who on Earth would leave this thing where anyone can touch it?

The Generic Tree Friends on the Ferris wheel.

That thing has gotten so fast...
Death: Generic Tree Friends

Goof #13: Blood in Lumpy's antlers, and each antler has two prongs instead of three.
Death: Lumpy

His intestines fall out.

The teddy bear bounces on The Mole's head.

The happy ending.
Retrieved from "https://happytreefriends.fandom.com/wiki/Pitchin%27_Impossible/Gallery?oldid=343385"
Community content is available under CC-BY-SA unless otherwise noted.