Everything's nerve wracking if you're Flaky.

Flaky is cooking, and Nutty wants to eat the ingredients.

"You can't get this chocolate!"

"Let's put it in the blender."

Flaky is going to put the peanuts in the blender.

Flaky looks at the blender.

"The blender is stuck."

This is a dumb idea.

"I need to turn off the blender."

"Where is that peanut?"

Flaky, are you allergic to them?

"What's happening to me?"

At least Flaky got help.

She's made a full recovery.

Mime about to have his peanuts swatted by Lumpy.

Flaky forgets how to safety.

Who put Nutty in charge of anything involving sugar?

"(The balloon animal is ready!)"

He doesn't care that the birthday boy hates him?

He makes creepy faces before blowing a balloon.

It flew away instead.

"(Oh goody! The balloon landed next to my favorite snack)!"

Mime is going to take some peanuts.

You're lucky the blender isn't on.

The Mole is good at this job.

And who put The Mole in charge of anything involving pictures?

The Mole goes away.

Sure, put a sugar addict in charge of the punch bowl.

"How does it taste?"

Isn't that a bit too much?

We mean that he likes his punch really sugary.

The face he makes every time he eats sour candy.

Who're we kidding? He can never have enough sugar.

How does that much sugar fit in one box?

Maybe because it is water.

Who put Sniffles in charge of anything?

"Let's put the apples into the barrel."

You're looking at a champion apple-bobber!

He's putting it back in the water after it was just in his mouth?

Flaky sees someone out the window.

Time to turn down the lights!

Flaky bringing the cake to Flippy. Before Nutty eats it.

"You are very good friends!"

A lot of sugar!

Mole, close both of your eyes!

Why would The Mole need a blindfold?

Flippy and his cake.

Flippy is going to blow out the candles!

I wonder what he wished for.

The cake knife is quite sharp.

Flippy looks at it.

"This is gonna be your funeral!"

"You need to cut the cake now!"

One drop of sugar is all it takes.

Nutty carrying peanuts in his twister.

Flaky's about to eat her piece of cake.

They just had to serve peanuts at this party.

"Where did these peanuts come from?"

"Hey Toothy, do you want more?"

Flippy beginning to flip out when he hears the balloons pop.

Uh-Oh! Flippy is starting to flip-out.

The background image transforms in flashbacks of gunshots.

Even on his birthday, your flipping-out does not leave it in peace.

That is to say so unpleasant.

Now, he really transformed into Fliqpy.

Now it is a good hour to escape.

His pupils still were of normal size.

I don't think he was invited.

Fliqpy looks at the table.

In a split second, the cake flies.

This is how Fliqpy celebrates his birthday.

He is satisfied with what he is doing.

His face is cut by Fliqpy.

Okay, that's a bit much even for us.

Who here wants a Face-Cake?

Fliqpy is not finished with his work.

"This is so beautiful."

I think that he found some.

Cuddles and Sniffles are horrified with what they're seeing.

"OH MY GOD, HE KILLED TOOTHY!"

Sniffles runs off, hopefully to call for help.

Cuddles, why you didn't run?

"Hey, do not leave me here alone Sniffles."

Now there's no chance of escape.

What does he want with the them?

The balloons collide with the fan blades.

Cuddles isn't a fan of fans. Like someone else we know.
Death: Cuddles

Fliqpy plugs in the blender.

Sure, hide somewhere you can't breathe, instead of jumping out that window next to you.

You hide only now?

The plus side to having a nose like that.

Fliqpy searches for more victims, despite Flaky being right in front of him.

"I'll kill her after the guy in the barrel... or leave her alone because of her allergy."

"Get me outta here!"

This wouldn't have happened if you just ran for the exit.

At least he's not drowning anymore.

Just rub some dirt on it.
Death: Sniffles

"Let's put the tail on the donkey."

And there goes Flaky.
Death: Flaky (Not seen)

The Mole kills Flaky and himself.
Death: The Mole (Not seen)

"Time for some juice." 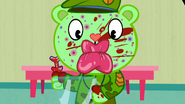 It ends with a fourth wall break. 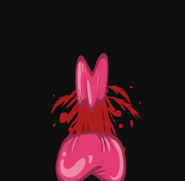 The party room being decorated.

Fliqpy's carnage as of before attacking Sniffles.