Binoculars are good at spying on an enemy base

Flippy and his allies.

Can't believe I have to stand here... 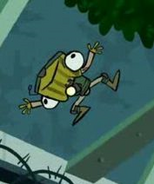 He's not a mammal but I dare you to tell him.

They should have called him "Licky"

That apple is a bomb. 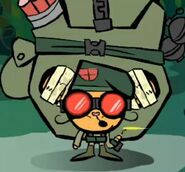 He was originally supposed to be a rhino.

Well, no one ever said he was a good soldier.

Flippy attempts to use the knife again.

Poor Sneaky, thanks to flippy.

Maybe the explosive expert can save the day.

Pizza shield, every military needs them.

This will be a problem.

This is why cheese and mice don't mix.

And the mouse is dead.

Every thing is going to be ok.

Long story short: Flippy was out drinking the night before, and he woke up in the jungle with some body parts and a complete corpse.
Death:Sneaky

"My friends are dead."

"Now we must think about this."

Flippy will never forget about this.

And thus Fliqpy was born.

Are corpses supposed to do that?

False alarm, it's only Trademark Flippy.

Besides the New Season Teaser, this is the closest to a gun the show has ever had.

...to death by teeth bullets.

"All of my soldiers are dead!"
Death: Tiger Soldiers

Right in the gut.

The Tiger General pretty much gave Fliqpy an advantage with those sharp bone hands.

Unlike Handy, Fliqpy found use with a lack of hands.

The Tiger General seconds before death.

He was never known for his sanity.

Meanwhile, back at the enemy base.

"The General should've been back by now."

"Your not the General!"

The Tiger General's face after death.

Trademark Flippy has a new name.

The image that inspired the creation of the episode.
Add a photo to this gallery

Retrieved from "https://happytreefriends.fandom.com/wiki/Operation:_Tiger_Bomb/Gallery?oldid=354489"
Community content is available under CC-BY-SA unless otherwise noted.