Happy Tree Friends Wiki
Register
Don't have an account?
Sign In
Advertisement
in: HTF games, Other Media, Lists, Games Based on Episodes

View source
watch 01:55
Cobra Kai Season 4 - The Loop
Do you like this video?
Play Sound

Apart from the arcade games available on the web, Happy Tree Friends also has mobile games. The latest and most popular of these games is currently Deadeye Derby.

is based on the episode Spin Fun Knowin' Ya. Before you begin the game, you can choose one of the victims (Cuddles, Giggles, and Toothy) to be placed on the merry-go-round. You, as Lumpy, can spin the merry-go-round by tapping the left keypad, move joystick to left or the 4 keypad repeatedly. If you want to launch the victim, press the 5 keypad or the middle of the joystick.

The gauge at the top of the screen when Lumpy is spinning the merry-go-round determines the power of the launch. The more it's filled up, the farther the victim gets launched.

When the victim is launched, you'll see that there are various traps and objects scattered around that can damage him/her. The more damaging the object is, the more score you'll get. If you get enough score, you'll unlock more hazards to be placed in the game field.

The gameplay is pretty simple. When the victim is launched from the slide, make Flippy swing his bat by pressing the 5 keypad, otherwise the victim will crash himself/herself to a wall. The distance of the launched victim after getting hit by Flippy's bat will be your score. You can also earn more score by having the victim hit special targets.

There are two game modes, Classic and Bonus. Classic mode only involves getting score by launching Flippy's victim using his bat as far as possible. Special targets can also become your additional score. Bonus mode involves Flippy using his victim to hit the special targets. If you miss the target five times, the game is over. 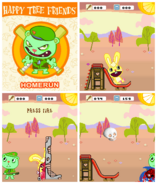 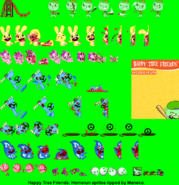 The prologue to this game shows Cuddles, Giggles, and Toothy blowing balloons. Flippy then pops up, but then flips out because of popped balloons.

Just like Spin Fun, you can choose one of the victims before beginning the game. The victim will be tied to Flippy's helicopter.

As you travel through the forest, press the 5 keypad to keep Flippy's helicopter hovering. There are obstacles on your way, which can damage your victim. Damaging your victim earns you points. Ho

wever, the obstacles can also damage Flippy's helicopter, so watch out. Every time you complete a level, new obstacles will be added and Flippy will get an extra life.

The game is over if Flippy runs out of lives.

This mobile game is centered around Lifty and Shifty.

The objective of the game is to get as much money (score) as possible by getting victims' blood into Lifty and Shifty's buckets. The victims, in no particular order, are Cuddles, Giggles, and Petunia. One victim can appear at a time, cluelessly bouncing on Lifty and Shifty's trampoline, only to hit various hazards.

Move Lifty and Shifty left and right by using the 4 and 6 keypads, respectively. When the victim hits a hazard, his/her blood will fall down. Get the blood into the twins' buckets for score. You can also get some score by having the victim hit the hazards as well. To heal the victim's injuries, bounce him/her to a first aid kit.

If the victim falls to the ground, he/she will splatter and Lumpy will clean the mess. After that, a new victim comes by. If all three victims fell to the ground, the game's over.

You can unlock more hazards by beating the previous high score.

This IOS apps game involves Cuddles on the screen. The player can use his/her finger to either access the menu or injure Cuddles. Cuddles can be affected in any manner from being tickled or poked, to slapped in the face (as the title suggests), to being maimed and killed by the player.

Due to poor reviews, this app was rejected and is unlikely to be updated with new characters.

Based on the episode Camp Pokeneyeout, this game was released in the app store on January 16, 2014. It is a multiplayer game in which the player must attack opponents and bosses, as well as upgrade their weapons and carts.

Player as Flaky vs. Toothy.

Toothy in the game.

Flaky in the game.