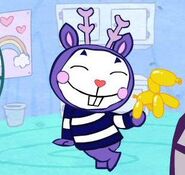 Mime running while Petunia looks on.

Mime at the library.

Mime, Lumpy, Giggles, and Flaky dressed up for halloween. 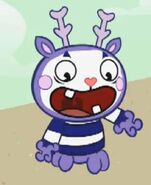 Apperently, his antlers are flexible.

You'd think Mime would do this more othen in order to avoid dying so much.

Shouldn't the newspaper logically be invisible too?

Mime and a butterfly.

Even his tears are invisible.

Mime looking for a new job!

A new unicycle! Mime wants this!

Uh... Mime and Petunia saw each other. Is this a date? 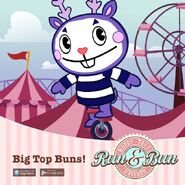 Mime in Run and Bun.

Mime in Mime to Five.

Mime with Giggles in Who's to Flame?.

Mime with a dotted line bow. 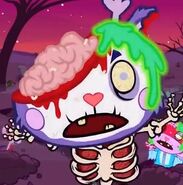 Please, no comments from the "Peanut Gallery".

Mime in the shooting gallery.

Mime doing what he likes doing most: making balloons.

Careful with those supplies!

Mime with an afro.

Mime looking through his fingers.

Mime in his Olympic Smoochie.

Mime in Take Your Seat.

Mime with the tree friends.

AnimationFan15 did not find this moment funny.

Retrieved from "https://happytreefriends.fandom.com/wiki/Mime/Gallery?oldid=335142"
Community content is available under CC-BY-SA unless otherwise noted.