Yeah, i just looked back on my comments, and i know i didn't mention anything about how he's so rich, and dancers and singers normally are, however, it would still only suggest this is a profession of his (on episodes that do not involve him in another job, such as a fireman). So, i cannot see this being put down on the occupations section, but it may be worth a mention in his bio, which i've also just noticed it's there, but the bottom line is, i think we only put in professions that have been conclusively proven. 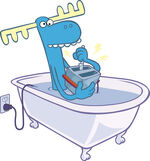 I will try to answer what i think you have asked, if you mean turning a file on a page into a link, you will need:
[[File:Lumpy.jpg|right|150px|Lumpy and scissors|link=Lumpy]]
as an example.

If it is not this, i'll need you to reword the question.

Okay, here's the coding for a gallery (you need to press "enter" after every image, you shouldn't put it on one line):

To add a caption to an image, do what's been done here:

Cuddles' Intro
Add a photo to this gallery

I saw what you put, so i decided to add temporary section to the Home Page, hopefully visitors and editors will notice it. :)

And about the characters pop-ups and intros, it did get a little messy, so i had to use the rollback feature; if there was anything you put that was a help to the article, you'll need to put it back up again, sorry, it was the only thing i could think of.

I really don't know, you might want to ask Gala as well, i mean, it looks similar to the Canadian flag, at least, but i still wouldn't be able to call it. Although, it would be nice to know the main show does have places outside of North America for a change.

I've added to the locations list, however, i've also noted that it isn't conclusive, because we are going on just a flag, and it may or may not be a canadian flag, it may just look like it (just playing it safe).

I'm blocking you from editing because you doing nothingless and a bad-hot idea that LMB is irrelevant to HTF. LMB is just like and related to HTF and Please stop doing that. If you lik'd as i said like that. You will be blocked from editing for 3 weeks. If you do it one more time. You will be blocked even more days and hundreds of days just like 6 months and stop that right now. OKAY! UNDERSTANDED! Thank you. Dymanda 21:10, January 20, 2010 (UTC)

I'm asking for some help from a few people, i've been trying to make more of a "web" image for the article Character Friend List, because listing each character, however, i have two problems:

If anyone wishes to help go to User:Pyro Python/Workhouse#Main Character Friends Web, check the article (make alterations/discuss), and view the FULL SIZE web, and give me an opinion on it please. Maybe the article can finally be in order afterwards.

Yeah, i had the idea of arrows, but, like i said on the image, it was only a beta of the image, so that complication wasn't worth the time, and i took the images off of here (as you may have guessed) and copy and pasted them. I don't think it was the format i saved it in that caused a graphical problem, if there is one (i didn't see one on my beta, but your small scale one seems to have problems, did you copy and paste any images from my image?), it will be that i had to find a way to shrink the images, and i know resizing images is a very good way to pixelate them.
But, i want to ask, what is the definitive advantage of PNG over JPG?

I also want to know if you've checked the Character Friend List article, because i think i mentioned the article was a little inconclusive, as all the editors weren't sure what to do. I have a feeling that there may need to be a few people to agree on what needs to be displayed, it is very misleading.

A Message longly for you Edit

Having seen an episode, I agree with you that the London Mobile Buddies is a rip-off of Happy Tree Friends. Infact the episode Wikki's restraunt followed the exact same plot as Flippin' Burgers. Not to mention the fact that the characters are almost identical.

I did also send the original message to Gala and i love splendid, so i'm hoping a few people will get together for this to work, i didn't dare message Wikiguy because he's busy on the Mortal Engines Wiki, and i'm not going to try to drag him off of it for one article, he has a whole wiki to attend to. If you can find anyone else, that would be nice, too. P.S: I'm still waiting a reply from gala and splendid.

Also, i noticed the difference, and i'll try to save it in PNG format, the iamge should be smaller 10MB, however, i do need to make it larger, because the web was tightly packed, and the image was already over 1 megabyte on JPG, but, if i can get a better colour on it, then i'll go for it.

If anyone's interested in my blog about Nutty's death in Swelter Skelter, and a few ideas that come with it, then click this link.
Thank you,

First off, i want to say you aren't bothering me, and i did ask for people to message me for suggestions, so it's alright.

Onto the video: if you've read any of the text on the Media Archive i have (i can't remember where), i did mention the Nutty video, and i said it was scary, the untooned version was, at least, it actually gave me a shiver down my spine. Despite saying that, i could put that up next week if there isn't anything else more suitable, because i did also (when i had untooned vids on the featured media) ask people to check out the videos by the said user because his untooned vids are all very well done.

In short: on Sunday 31st January, i'll put the untooned Nutty video in if there isn't anything more suitable (like i've said, i have done untooned videos previously, but not THAT untooned video).

Thanks, and i apologize for typing too much,

Thanks, i suppose this may be a little galling, but i actually did my last 1,000+ edits in 8 days (maybe i should take a break 0.o). But i've still got a lot to do, so i've no idea how high the number will shoot up to.

Hi guys,
I'm asking for you to vote on a few articles' names, seeing as they may need a change, and i don't know if they should be,
Please click this link if you wish to vote.

I'm tired of nothingless... please be friends with me.... Edit

UFFF... It's over the nothingless... now i�want you to turn friends... I promess i�won't me mad at you, the IP and Ultrablastic anymore because my daddy wants to ban me to be here if i continue to be mad at you and both them two... But i looked everywhere if the nothingless is almost over but... I'm getting tired of being mad... So if you stop doing nothingless in my blog "Wikkykill".. We can be friends... making a game and talking without being mad... Okay and don't do nothingless anymore... Okay? Dymanda 00:23, January 31, 2010 (UTC) � � � I still dont know how you knew that it was me from the start but okay no more fighting.Ultrablastic123 05:23, January 31, 2010 (UTC)

Re: A Problem Edit

The Problem is why people edit the article "Lists of Belongings" everyday i looked at the 50 edit history dropped and the last date was January 12, 2010 around 14:00. This is why you contribute on it so much. You know. I don't wanted it to be edited anyday and all hours. I want a new admin called "UvuvalUvoddBotProtecter" to protect it all year! Thats all. Dymanda 00:23, February 2, 2010 (UTC)

Re: Lists of Belongings Edit

how do you get one of those? Edit

yoyi22 what i ment by that on the favoret character blog was how do you get one of those picture things on the side of the screen. and yes i speak good english i just cant type that good.Ultrablastic123 21:36, February 9, 2010 (UTC)

Hi Yoyi22! I have a message for you. The article 'Flaky' was edited everyday. I don't want it to be edited Tomorrow. People edit the Section 'Gender Dispute'. The everyday-editing in Flaky at Gender Section really pisses me off!! Xiao Xiao Man! 21:12, February 16, 2010 (UTC)

All about my content i made in the Flaky talk page what about Ultrablastic123 and you have posted. Which that content of warning to no edit i'm going to dodge this content of section. Can i dodge it please or you dodge it? Dymanda 21:32, February 22, 2010 (UTC)

Off Into Space Edit

not the blogs my talk page

Hate of You Edit

Retrieved from "https://happytreefriends.fandom.com/wiki/Message_Wall:Disabled_account/User_talk_archive"
Community content is available under CC-BY-SA unless otherwise noted.