There have been five snakes that have appeared in Happy Tree Friends, almost all of which involved in the killing or injuring of characters. Even though the snakes are non-anthropomorphic animals, they all seem to show a few small anthropomorphic traits. This trait, like when they are seen upset, the green snake, the rattlesnake, and the cobra, and the smoochie snake because it wants a meal, all frown which real snakes cannot do, and the green snake's mouth drops at the corners to show it's angry, which is another thing a snake cannot do. All of the snakes appear to be very aggressive, however, the Cobra's attack was in self defense, as it bit Toothy and "ran" away. the Rattlesnake also appeared to be very defensive. The Green Snake is a lot more offensive, as it attacks a paralyzed Petunia, and swallow her and Lumpy, and the smoochie snake went straight for Toothy.

The Green Snake appeared in From A to Zoo, where it ate Petunia and Lumpy, and had begun to digest Petunia, it died when Lumpy cut his way out of the snake, bursting it open. The green snake is most likely a type of python, seeing as it never was shown to bite either Lumpy or Petunia, in fact, Lumpy had a struggle with it. The green snake is a murky green color, and is pale green on its underbelly, and could be between 10 to 15 feet long (assuming Lumpy's 6 foot). The green snake also displays a fairly realistic digestive system, where it has already (after a space of time of a few hours) partly digested Petunia, as she is covered in thick gastric juices.

This snake makes a possible cameo in the Run and Bun game. Appearing as one of the obstacles of the Jungle level, it would eat the player if touched. It seems to have a noticeable smile when it eats a character.

Feeding time at the zoo.

The green snake contempt with its meals. 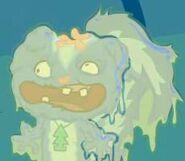 The green snake in Run and Bun.

The smoochie snake in Toothy's Easter Smoochie and quickly crushes Toothy and popping his eyes out, and also attempts to eat him, this snake is also likely to be a python because it hasn't been shown to use venom, it has dark green scales, and light green, clearly segmented underbelly, it also has orange eyes, suggesting its deviance. This snake has also been shown trying to eat its target, however its mouth cannot fit around Toothy's large head, despite how snake skin can stretch; although, this would be an inconsistency because the green snake swallowed Petunia and Lumpy alive with no trouble. In this smoochie, the snake tried to eat Toothy's head but his head was to big for the snake to eat. 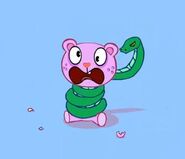 The snake trying to eat Toothy, with fangs showing.

The Rattlesnake only appears in Ipso Fatso, and not much is known about it. Lumpy stays away from the Purple Rattlesnake while he enters the restaurant. As Rattlesnakes are venomous, Lumpy wanted to avoid stepping on it. It appears to have regular eyes and is purple with yellow marks all over it, including a rattle on its tail.

The Cobra appeared in Take a Hike, where, in its short appearance, it bit Toothy on the arm because Toothy accidentally used it as rope for his tent. It left afterwards. Its venom was proven to be incredibly potent, as it caused Toothy's arm to swell to multiple times its original size, and, when spat in Cuddles' eyes, caused them to bleed profusely and instantly blinded him. The cobra is very long and very thin, definitely enough to make a complex knot around a wooden stake, it has a hood and is a pale orange color with deep orange spots along its back, and has a pale yellow/orange underbelly, and, being a cobra, has a hood, which is the flat back of the neck just below the head, which is usually displayed as a threat.

Toothy's arm after being bitten by the cobra.

The effect of the venom on Cuddles' eyes.

A dark green snake with light green stripes on its back, it is one of the various pets stolen by Lifty and Shifty in Junk in the Trunk. Its species is unknown, as it resembles a rattlesnake without a rattle yet stands erect like a cobra when in Lumpy's house. It is the only snake in the series that didn't cause harm to anyone.

The Snake in Junk in the Trunk.

The snake in Lumpy's house with other pets.