This is a list of all of the pets seen in Happy Tree Friends, and are therefore non-anthropomorphic creatures in the Happy Tree Friends universe. They are alike as real pets, but cared by other HTF characters.

Mittens (also called Honey) is a pale yellow cat that appears numerous times in the series. She appears to be Giggles' pet. 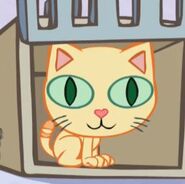 A newer version of Mittens.

Whistle is a small cute puppy who, upon hearing a whistling sound, turns vicious and kills other characters. He is based off Ken Pontac's dog. All of the characters who see Whistle want to own him but they end up getting killed. Whistle was originally the pet of Pop & Cub, until it attacked them and was taken away by Lumpy.

This is no harmless puppy...

A cream/light tan colored mouse Cuddles was seen with in Junk in the Trunk. Lifty and Shifty stole the mouse from Cuddles before his demise. It was later adopted by Lumpy, although his pet elephant appears to be afraid of it.

Cuddles' Mouse riding on his shoulder.

The mouse on its hind legs.

An orange goldfish owned by Handy in Shard at Work. After Handy accidentally gets the fish's bowl stuck on his head, he breaks it in an attempt to free himself, but drowning before finally being able to do so. The fish then swims in a pool of blood inside Handy's mouth.

The fish and its bowl being hurled into the air.

Handy has the bowl stuck on his head.

The fish swimming in Handy's blood.

This pachyderm appears in Junk in the Trunk as Lumpy's pet, being kept inside a giant hamster cage with tunnels. When Lumpy takes it for a walk, he brings along a big garbage bag for when the elephant "needs to go". He gets mad at it when it pees on the floor, so it runs away. It befriends Mime when he feeds it peanuts, but later ends up killing him. Lifty and Shifty spot the animal and attempt to kidnap it, but they could only do so by destroying their van, lifting the animal by rope, and then reassembling their van around the animal. Lumpy soon goes looking for the animal and discovers it and other pets being stolen by Lifty and Shifty. He manages to reunite with his elephant and adopts the other pets.

Lumpy taking his pet for a walk.

This bird appears in I Nub You. When Petunia takes it out of its cage, it flies out the window. It later appears at the end of the episode, where it causes the deaths of Petunia and Handy at the hospital by pulling on their stiches (splitting them apart).

This carnivorous fish appears in Something Fishy as Russell's show-and-tell subject. The fish causes the deaths of Giggles, Petunia, and Russell. It also injures Flaky by eating her hands. Multiple piranhas appear in YouTube Copyright School, where thay are being juggled by Russell. Unfortunately, due to a mistake, they end up attacking him.

Don't try this at home...or anywhere else!

This tortoise was also stolen by Lifty and Shifty. It was also seen as being vicious, as it eats Lumpy in Letter Late than Never. The tortoise is shown to have a flame painted to its shell.

Toothy waiting for his turtle to fly off the ramp.

Remember to feed your turtles.

Sniffles brings the blob creature to life in Pet Peeve. He adopts it as his pet and takes it on a walk, creating misfortune for several characters and eventually himself. The blob has corrosive skin which can penetrate through nearly every surface; as shown with Sniffles' hand, Lumpy's leg, The Mole's windshield, a car seat, and even a concrete road. Its gender is unknown.

Sniffles is mad at his pet.

Sniffles' pet riding in a car.

Sniffles' hamster made its appearance in Something Fishy. It was first seen when Sniffles was showing it off on a pet day in school, when it was running on its wheel. It was later seen being tormented by Russell's hungry pet piranha, where it tried to get away from it while running on its hamster wheel. Giggles then moved the hamster and its cage away from the fish.

Sniffles with his caged hamster.

There were many pets in Junk in the Trunk stolen by Lifty & Shifty, they were caged in a van, and some were even thrown at a pursuing Lumpy. In the end, Lumpy adopted most of these pets. The kidnapped animals include:

The pets in Lifty & Shifty's van.

The pets at Lumpy's house.

All of these pets appeared in the pet store in Doggone It.
Retrieved from "https://happytreefriends.fandom.com/wiki/List_of_Pets?oldid=258831"
Community content is available under CC-BY-SA unless otherwise noted.