Hazards are rife in the Happy Tree Friends universe, they range from natural events to specific objects.

Non-anthropomorphic animals have caused the deaths of characters in numerous episodes. Usually these attacks are done on purpose, but at times something may be caused accidentally that would make normally friendly animals turn vicious (such as Whistle when he hears a whistling sound, or The Baboon when a camera flashes) - They react same as Flippy do when he hears war sounds.

Eaten by a tortoise.

Cacti (plural for cactus) are tall, green, spiked plants which usually grow on dry places. They appeared in the episodes Just Desert and And the Kitchen Sink. In the aforementioned episode, Pop made the assumption the Cub fell into a cactus patch, and he worked his way through, scratching and pricking himself. When he made it to the other side, he was shocked to discover that there was a sidewalk he could have taken to go around the cactus patch.

The cacti and Cub in And the Kitchen Sink.

The cacti in Just Desert.

These are purple flowers that appeared in Idol Curiosity. They are capable of removing and digesting flesh, bone, muscle, and internal organs. One flower nearly bit Flaky on the face and sheared a butterfly to bits. When Sniffles dragged Flaky through a thick bush of these flowers, all that was left of Flaky when they got out was one of her arms, with an uprooted flower still snared on it. Sniffles was missing parts of his skin and had bite and scratch marks all over his body.

So many flesh eating flowers!

A large meteor is seen flying towards the earth in Better Off Bread. Splendid manages to stop it by flying directly at it with his fist out, this only causes the meteor to break into smaller pieces resulting in a meteor shower that kills Toothy.

The meteor hurtling at the earth.

Smaller rocks.
Add a photo to this gallery

The tornado appeared in Just Desert, where it was capable of shearing anything apart, a testimony to its power is where is skinned Lumpy down to the bone. Another tornado appears in Breaking Wind, it comes in contact with Giggles, Cuddles, The Mole and Lumpy again.

The tornado in Just Desert.

The tornado in Breaking Wind.

One can be seen at the bottom of the ocean in Sea What I Found. The heat from its lava melts Lifty and Shifty's stolen gold and causes the submarine to explode.

The lava.
Add a photo to this gallery

Only seen in Mirror Mirror. An active volcano causes panic in a city when Splendid throws a large rock on the top. This fixes nothing as the volcano blows the rock away when it erupts.

An erupting volcano.
Add a photo to this gallery

In Ski Ya, Wouldn't Wanna Be Ya!, Flaky accidentally causes an avalanche with her screaming which may or may not have killed Giggles and Petunia.It also got into Disco Bear´s house.

The avalanche "created" by Flaky.

It floods through Disco Bear's home.
Add a photo to this gallery

An oil spill is caused on a shore in Better Off Bread. The oil has spread over two birds and a seal.

Animals covered in oil.
Add a photo to this gallery

In Remains to be Seen, Flippy is seen driving a truck with barrels of waste in the back. Where and how he got it is unknown. The waste is shown to be capable of bringing dead characters back to life.

Considered as the pinnacle of danger in the Happy Tree Friends world, an object specifically created to cause death and destruction in some of the most intricate and gruesome of ways. 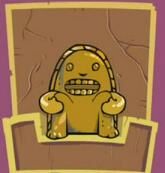 An example of The Cursed Idol's appearance.

This squid-like creature was released after Pop read a spell in a cursed book. It possessed Cub and killed Petunia. Lumpy managed to defeat it by devouring it.

Cub being possessed by the demon.

Lumpy is shown to have devoured the bloodthirsty fellow.
Add a photo to this gallery

A large, mythical, Japanese, monster who looks like big dino was first seen in Wingin' It, it eats Flaky at the end of the episode.

In a panel of the plane manual.

Flaky before being eaten.
Add a photo to this gallery

Considered hazardous only to Splendid, and possibly Splendont, its radiation causes Splendid to feel weak and sick, extreme doses can cause extreme sickness, fur and skin loss, and is possibly lethal. It is Splendid's weakness like the Kryptonite is Superman's weakness.

It appears at first as a regular meteorite when it explodes in the air and appears to be a green seed. Apparently, if one touches the seed before planting it, clones of whoever touched the seed quickly grow from a plant.

Seed.
Add a photo to this gallery

The sentient earthquake is a fissure that appeared in Idol Curiosity. It followed Sniffles and his partners to retrieve The Cursed Idol. It is probably something sent by the Cursed Idol to get it back to its rightful place. It swallowed Giggles. and it tried to kill Sniffles. Only Sniffles runs away and at the end of idol curiosity the earthquake kills Sniffles cutting him vertically in half.

Flippy suffers from PTSD (Post Traumatic Stress Disorder) from his days in the war. Whenever he sees/hears something that reminds him of warfare, he will flip out and kill other characters. He seemed to have gotten rid of this problem in Autopsy Turvy but was killed shortly afterward. It was later revealed in On My Mind that he got it back.

Fliqpy in Over Your Hedge: HTF's last Still Alive Episode.

Fliqpy´s and Flippy´s clones in Autopsy Turvy 2 parts episode.
Add a photo to this gallery

Mr. Pickels is known for killing other characters and framing Lammy for it. Lammy is the only character who can actually 'see' Mr. Pickels, while everyone else sees him as an ordinary pickle. Thus whenever Lammy tries to stop Mr. Pickels, it would appear to another character that Lammy is actually the one responsible.

Mr Pickels as normal pickle.
Add a photo to this gallery

The Ants have often evaded Sniffles' schemes and got revenge by sadistically torturing and killing him. Tongue in Cheek was probably the most torturous episode so far, bringing Sniffles to extreme tears, whimpering and begging. This is also the longest and most torturous death that Sniffles (and possibly any other character) has endured. Sniffles is the only character to encounter or be killed by The Ants.

Ready for war with anteater!!!

Whole ant family.
Add a photo to this gallery

Most of the series' deaths have been accidental, but sometimes a character has murdered on purposely, most notably in Happy Trails Pt. 2: Jumping the Shark when Flaky was murdered by Handy, Sniffles, Flippy, and Lumpy. Suicide attempts have also been seen, such as Petunia in Wishy Washy.