There are many birds that appear throughout Happy Tree Friends, and they usually make only one appearance and a minor one at that. However, some play a pivotal role in the episode in which they appear in, sometimes being a major problem to a character and even occasionally kill the characters.

The Canary made its only appearance in I Get a Trick Out of You. The canary is yellow like a typical domesticated canary, but it was never seen alive as it was already dead when Lumpy pulled it out of his hat to perform a magic trick (in which, Lumpy nervously tossed its corpse away). It presumably died of suffocation, as it has probably been in Lumpy's hat without air for quite some time and there are no visible wounds on its body.

Chickens appear at the end of Autopsy Turvy (Double Whammy Part II). They are shown laying eggs inside a truck that ran over Flippy, along with Lumpy who was hypnotized in the previous segment.

A large number of yellow chicks make their appearances in a scene in From A to Zoo when Lumpy tries to get a frightened Flaky away from them. However, all he manages to do is trample on and kill dozens of them, covering Flaky and himself in blood and bird carcasses, as their carcasses are seen even to the end of the episode.

A small group of chicks appears in Toothy's Easter Smoochie, hatching out of the eggs that Toothy swallows, killing him in the process.

Various Chicks in From A to Zoo.

Crows appear in Aw, Shucks!, being seen as a pest by Lumpy for trying to eat his corn cob. One crow is chased by Lumpy, evading him numerous times, later reappearing at the end of the episode chucking one of the kernels of Lumpy's corn into its beak.

Ducks appear twice in the series. In The Way You Make Me Wheel, Lumpy swerves his car to avoid hitting a family of ducks crossing the road, subsequently killing himself and Handy. In Mime to Five, flesh-eating ducks are shown as a part of Lumpy's circus act, soon killing pretty much everyone except Mime and Cro-Marmot.

Main articles: The Eaglet or The Eagle

An eagle appears with its chicks in Take a Hike. The chick and its unhatched siblings were killed by Flaky when she tried to put the fallen chick back in its nest, only to accidentally knock it off, breaking the eggs and crushing the chick. The vengeful mother then kills Flaky and later uses her carcass as a new nest for her new eggs. It is unknown whether new eggs are of the same egg batch, or if they are separate offspring of hers. The eagle chick is shown as a pink bird, while the mother is navy blue. The eagle chick may be pink from a lack of feathers, or it may be covered in a pinkish down.

Front view of the eagle mother.

Gulls (or seagulls) appear various times in the series, usually in areas surrounding water. They eat the remains of dead tree friends or injured tree friends with large blood in their body, with the exception of killing an injured Flaky in Wipe Out!.

A flock of gulls attacking Flaky.

The only time an owl appears is in Out of Sight, Out of Mime. A silhouetted owl is perched on a branch at the beginning of the episode while Generic Tree Friends can be seen trick-or-treating in the background.

A green parrot (or possibly an animatronic) appears at the beginning of Sea What I Found as Russell's alarm clock. Seven pink parrots would later appear in Junk in the Trunk as some pets that were kidnapped by Lifty & Shifty, and later rescued with the other pets by Lumpy.

A pink parrot in Junk in the Trunk.

Two pink pelicans briefly appear in Junk in the Trunk as stolen pets. Pelicans can also be seen as obstacles in the game Strandead. 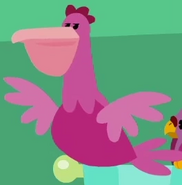 A pelican seen in Junk in the Trunk.

A pelican in Strandead.
Add a photo to this gallery

Penguins make two appearances in the TV series. They first appear at the end of Junk in the Trunk as one of the many pets rescued by Lumpy. Their biggest role is in Double Whammy Part I, in which Flippy joins three penguins for a tea party in his dream, until one of them is killed by his evil side.

Penguins from Junk in the Trunk.

The penguins from Double Whammy Part I.

Vultures appear in two episodes of the series; Just Desert and Pet Peeve. Both times they are seen attacking Lumpy, in contrast to their realistic roles as scavengers.

A vulture in Pet Peeve.

The Woodpecker is a bird that pecks at trees to get food, usually causing trouble when doing so. It was first seen in Hide and Seek, where it set off Flippy's 'bad' side for the first time by pecking a tree. It also appears in Eye Candy, where it pecked Toothy's eye, in Eyes Cold Lemonade, and in the game Sugar High. 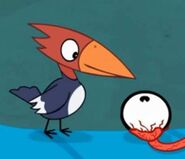 The woodpecker as it appears in Eye Candy and Eyes Cold Lemonade.

The woodpecker's initial appearance in Hide and Seek.

Not counting the specific birds above, other small birds make brief appearances in various episodes, such as Doggone It, Junk in the Trunk, and Pet Peeve. Many, but not all, of these birds are pets.

The Red Chick is a minor character that appears in the episode All Flocked Up and the game it is based on. After it falls from its nest, Lumpy tries to place it back in its nest, much like in the game. This bird is very similar to Petunia's pet green bird, except for the color and a few defining features, such as feather displays. It is of a deep red color with orange wings. It also sports a pair of loose, pointed feathers on the back of its head. 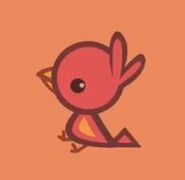 Close-up of the red chick.

The chick in Lumpy's hands.

More chicks in a nest.

Petunia's Green Bird, which looks similar to the Red Chick, appears in the episode I Nub You, where it escaped from her and indirectly caused her to lose her hands when it flew away. It reappears at the end of the episode and lands on Petunia and Handy, who were accidentally sewn together by Lumpy, and pulled off the stitches, violently separating and killing Petunia and Handy. It is of a shade of green with orange wings. It also has an elongated orange feather running down the back of its head.

The bird in Petunia's hands.

The bird reappearing at the end of the episode.

The Orange Bird has a similar appearance to Petunia's Green Bird and the Red Chick, except it is orange and its feathers are on the top of its head. It appears in the episode Brake the Cycle, where it is seen stealing bolts from Toothy while he was distracted fixing his bike. This inevitably led to every death in the episode, particularly Toothy and Mime's (as Toothy tries pulling his intestines, the bird steals another bolt, which causes part of the intestines and the bicycle parts to land on Mime). At the end of the episode, it flies to its nest made out of stolen bolts just in time for one of its eggs to hatch. For some strange reason, a wrench was inside the hatching egg. 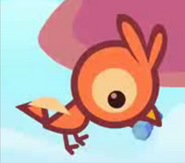 The orange bird close up.

The bird's nest made of bolts.

The purple Bird looks quite similar to the orange bird listed above, though having a slightly larger head and no outline around its body. It appears in Camp Pokeneyeout, where it was seen collecting acorns in a tree. One of these acorns fall on Cuddles, who would assume that Toothy threw a rock at him with a slingshot, thus leading to a quarrel in their friendship.

A pink bird in Doggone It.

A green pet bird from the same episode.

A bird and its chick in A Hole Lotta Love.

A flock of birds about to attack Lumpy in Pet Peeve.

Two birds that would be killed by Lumpy's bus in Happy Trails Pt. 1

Retrieved from "https://happytreefriends.fandom.com/wiki/List_of_Birds?oldid=330100"
Community content is available under CC-BY-SA unless otherwise noted.