This article lists all of the items owned by each of the characters in Happy Tree Friends. Apart from items essential to their appearances, each character has a number of miscellaneous belongings, which vary between episodes. This article does not cover most items within characters' houses, or the Houses themselves. For details on them, view the Locations article. 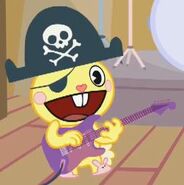 Cuddles is the new Russell!

Cuddles is seen wearing soccer T-Shirt in A Change of Heart.

Cuddles is an expert at skateboarding.

Cuddles and his telescope.

Cuddles' well and watering can.

Giggles is always so stylish wearing her bow!

The peasant version of Giggles' bow.

Giggles with her magneta colored hat.

The sweater Giggles ordered in the mail.

The force is strong with Giggles.

Toothy with his bicycle in Brake the Cycle.

How did he get all of these supplies?

Toothy in a wagon.

Toothy with a fire extinguisher in Spare Tire.

Toothy is a cowboy!

One of his starring pop-ups involve Toothy having a toothbrush and this is the one time we see him with one.

Lumpy as a optician in A Sight for Sore Eyes. 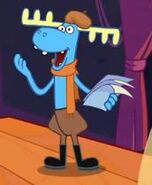 Lumpy the Priest as he holds a Bible.

Lumpy wearing the most adorable sweater ever.

Lumpy attempts to start up his weed-whacker.

Who knew Lumpy knew his way around the needle and thread?

Petunia as a Girl scout.

Petunia is sad because she lost her hands.

The sun is so bright today!

Petunia with her teddy bear. 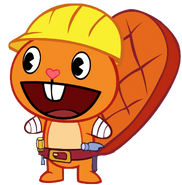 Handy's boots, which appear for only this one scene.

How does he do it?

Nutty and his scooter.

Who knew Nutty was a fan of the Batman series?

A lollipop that is also an instrument?

Sniffles and his bicycle.

Sniffles as a pilot.

What a nice film!

Action figures of Splendid and, I guess a Transformer, on top of the shelf.

Pop and his grill.

Pop's lawnmower (which Cub is operating).

Something's familiar about that mask Cub is wearing.

For his age, Cub seems to be good at that game.

Cub and his ball.

Cub playing with a sparkler.

Who'd a thought Cub was the son of satan?

Flaky with a Cro-Marmot watch.

Soccer is not the best game for Flaky.

Flaky and her scooter. 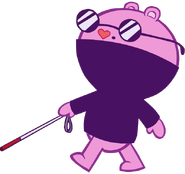 Watch as The Mole plays the trombone without his mouth.

Of all people you think would own a car... 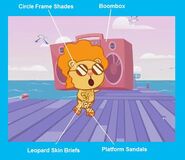 Pop was shocked when he saw Disco Bear.

Disco Bear and his submarine.

Most people use hairnets for cooking, not sleeping.

Disco Bear with his scooter.

Russell and his ukulele.

A ship in a bottle: Something no seaworthy sailor could live without.

I bet they stole this torch...

...and everything else they own.

Maybe even all of the things listed here don't actually belong to them since they could've stolen all of it.

Mime on his unicycle.

Mime as Rudolph the red-nosed reindeer (or a clown, I can't tell).

Cro-Marmot and his ice cream truck.

Cro with his shiny new trophy.

He lives in prehistoric times yet has something as modern as a bib.

I hear hammocks are very relaxing.

Flippy owns a lot of things.

Flippy using a pocket knife to save a life.

Good Flippy is really good at using knifes for none killing purposes.

What a sad novel!

It's got hearts on it!

Lammy looks at her watch. 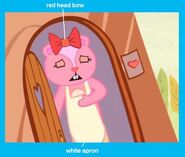 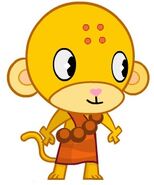 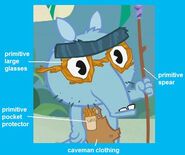 Things owned by Fall Out Boy.

The Ant and his hula hoop.

The Rat looks at his binoculars.

The Rat in giant hamster ball.
Retrieved from "https://happytreefriends.fandom.com/wiki/List_of_Belongings?oldid=362547"
Community content is available under CC-BY-SA unless otherwise noted.