Lifty & Shifty showing affection for each other.

Lifty & Shifty, ready to go down the chimney.

Lifty with a shiny crown.

Lifty and Shifty looking at a pizza.

Lifty and his brother with white pupils.

Lifty from Buns of Steal.

Lifty with a screwdriver.

Lifty and his brother Shifty trying to sell Nutty some jelly beans.

Lifty & Shifty preparing for something.

Lifty is so angry.

Lifty doomed saved by his brother.

Talk about shooting yourself in the foot.

He can be seen behind Giggles.

They're smirking because they just stole Cro-Marmot's wallet.

Lifty trapped on the meat slicer.

Lifty finishes up rebuilding the van while Shifty... supervises, it looks like.

Lifty and his brother steal a treasure chest from Russell. 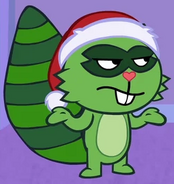 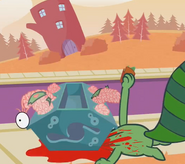 Retrieved from "https://happytreefriends.fandom.com/wiki/Lifty/Gallery?oldid=342000"
Community content is available under CC-BY-SA unless otherwise noted.