This article focuses on the relationship between Lifty and Shifty.

When it comes to good terms, Lifty and Shifty often work together in committing their crimes, and occasionally show concern for each other. The majority of the time, however, the two are known to come into conflict due to their greedy ambitions, sometimes to the point of choosing material possessions over their lives, normally on Shifty's behalf.

Lifty typically seems to view Shifty as a partner and cares for him to a certain extent. In Easy For You to Sleigh, he trusts what he thinks are Shifty’s instructions and jumps out the window without looking for himself, showing that he trusts his twin's judgement. They are also seen celebrating victories together in Sea What I Found, Gems the Breaks, False Alarm, and As You Wish.

However, in addition to often engaging in arguments with his twin, Lifty beats Shifty up over Pop’s wallet in Who's to Flame? and does not seem concerned about his death in The Wrong Side of the Tracks, only celebrating his own survival in a manner similar to that of Handy. He also tries to take a dollar from him in Doggone It and successfully takes all of Shifty’s pieces in a game of chess during Sea What I Found, which could be seen as both stealing and cheating.

Though few and far between, Shifty sometimes seems to care for Lifty. In addition to what is mentioned above, Shifty presumably tries to save Lifty in both Class Act, where he is seen trying to drag him off to safety, and in Buns of Steal, where he rivetes Lifty’s foot to the van to stop him from falling out. He also seems notably distressed at Lifty’s entrapment in Easy For You to Sleigh. 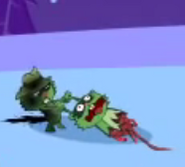 He really does care!

Shifty actually helping his brother rather than snatching the loot.

However, Shifty typically shows very little concern for Lifty and will always choose the loot over him. The most famous example of this is in Milkin' It, where Shifty throws Lifty out of a hot air balloon to his death in order to keep the cow they stole, and later snickers at doing so. Another example is in Sea What I Found, where Shifty simply takes Lifty’s gold bracelets and leaves him for dead. In a less obvious example, he shows no concern for Lifty’s deaths in Who's to Flame? and Buns of Steal, even using his dead body as a bridge, kicking off the head, in the latter.

Ironically many of these times in which he abandons his brother he finds himself in situations that he could have survived with an extra pair of hands.

Lifty betrayed by his own kin.

No respect for the dead sibling.

Shifty abandoning his brother and stealing his gold.

Retrieved from "https://happytreefriends.fandom.com/wiki/Lifty-Shifty_Relationship?oldid=346572"
Community content is available under CC-BY-SA unless otherwise noted.