Start a Wiki
watch 01:50
The Loop (TV)
Do you like this video?
Overview
Gallery
Trivia
Blurb

Images from the episode Let It Slide.

Whatever you do, don't take the pink slide.

Where did the purple and pink ones go?

Also, how did they get up there?

Look out below! No, seriously!

Following Lumpy down the slide.

Wasn't this one pretty straight?

I'm sure that won't do anything.

Bolt disappears for a split second (as a goof).

At least it's still on the slide. That helps right?

Cub was recently adopted by this inner tube.

It's much better at looking after him than Pop could ever be.

Cub and his new father didn't listen to my warning.

Now they pay the price for not heeding the warning.

Lumpy decorated one of his antlers for the holidays.

He likes to try to beat malls on decorating early.

"Who left ketchup in the pool?"

Okay, I guess he was the one with the ketchup.

Giggles was having a good time…..

I wouldn't look there if I were you.

…when she saw Lumpy naked, Then she WASN'T having a good time.

Goof #12: Giggles' bow is behind her head instead of front.

Lumpy isn't sure why she's screaming.

Then he finds a solution.

That won't do anything.

See? I told you it was okay.

Flaky is afraid of water.

Maybe Cuddles will respect that.

He is her friend right?

Flaky isn't having any of that.

Look, Flaky! The water is gone!

"But there's still water at the bottom." 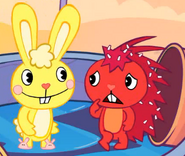 Flaky is having second thoughts.

"Come on, the teleporter only goes one direction, that's the only way down."

Cuddles is a dick.

But sometimes you do just need a little push.

At least the slide is just as long.

Legnthing and shortening slides are annoying.

Flaky has a lot of quills.

There were much less in Class Act.

If I was Cuddles, I'd take the yellow slide.

Is that her skin or her spirit?

What's he so happy about? Probably thinking about cheese.

He realizes his mistake...

Was it soon enough?

Where did all the quills go?

No one to blame but himself.
Death: Cuddles

At least he got going down the slid half right.

Reminds me of one of the Smoochies.

He at least took enough to cover his bottom, right?

Flaky being skinned alive as seen in the episode.

A reference in this episode when it's unpublished
Add a photo to this gallery
Retrieved from "https://happytreefriends.fandom.com/wiki/Let_It_Slide/Gallery?oldid=347990"
Community content is available under CC-BY-SA unless otherwise noted.