Lammy and Mr. Pickels in a HTF calendar.

Lammy and Mr. Pickles got the most votes!

The crack in Lammy's skull may prove that she is mentally unstable. 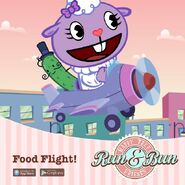 Lammy in Run and Bun.

Lammy and Mr. Pickles' brief appearance in The Chokes on You, along with Truffles and Flaky.

Lammy playing poker with the other females.

Lammy misses yet another Truffles cameo.

Always brush your teeth - especially if the toothbrush is huge!

Another promo of her and Mr. Pickels.

They were killed by Lumpy.

She's got a stalker.

Oh no! The teddy bear!

Lammy in shock after Petunia's death.

Lammy in jail with severely injured eye, and her new "friend."

Lammy with Sniffles and Nutty.

Lammy a split second before her injury in All Work and No Play.

Lammy's injury in All Work and No Play.

Lammy in her swimming suit.