Now it's the day.

The alarm clock is about to wake someone up.

Wow, it even has nice light effects!

Disco Bear goes to the bathroom.

"I'll show you the most stylish way to enter a bathroom."

The bathroom has a dance floor?

The moonwalk by Disco Bear.

"I don't need this anymore."

Disco Bear looks at himself.

"I have really nice hair."

Uh-oh. Too much weight.

"But I want to see it anyway." 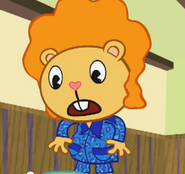 "How did this happen?"

"Well, I need to get rid of this weight."
STV1E2.2 A Cafeteria.png
The diner.

Disco Bear rides his bike to the diner. ...He has a bike?
STV1E2.2 Cafeteria Door.png
The diner's enter.

"Now I want to eat something."

"something dietetic, of course."

Disco Bear enters to the diner.

Giggles and Petunia in the diner.

Disco Bear in the diner.

"It's time to show off my talent."

"Everyone look at me!"

Disco Bear, remember that you're in a diner!

It's not a good idea to do this in diners.

Now they're not happy.

Disco Bear doesn't care that Giggles and Petunia dislike him.

"So many choices, which one is healthy?"

"They're all so delicious!"

But you're on a diet, Disco Bear!

"Wait! I forgot I shouldn't eat that kind of food!"

"I don't want to get even fatter!"

You'd think Nutty would be the one with this problem.

"I can't even eat my favorite food!"

"At least I can eat some fruit."

"What? Is he eating fruits because he's overweight?"

Petunia the skunk is about to form a circle because of Disco Bear's GIANT BELLY.

"Look at this perfect square!"

"This square is so funny!"

"I can't eat this anymore."

The floor is clean.

Right by the entrance!

Guess who's coming to eat something too.

"I almost stepped on this banana peel!"

No, there's water there.

"Well, someone should clean the floor."

"This electric cable is unsafe!"

Lumpy with his long leg.

And no one noticed these nails before.

"I hope this side of the floor is safer."

Well, that was unexpected.

"This is my territory."

Well, it is a cartoon.

Real moose aren't supposed to bend like that. Keep in mind that Lumpy is a cartoon moose.

Lumpy, you're right on the road!

"But you can have some anyway."

Disco Bear is full of energy.

"Get ready to feel pain!"

Lifty and Shifty: They also steal meat. It's not the first time.

Not a good idea.

"Well, skipping ropes are not for me."

"What a good workout; I'm going to have a small snack. Mmmm, link sausage."

This gym is so intense that gravity itself is lifting weights (hence those floating barbells).

"Just look at these muscles."

"Now I need to know how much I weigh."

He's so sad because of this.

"Well, then I'll just get some exercise."

Giggles and Petunia in the gym.

Disco Bear also wants to walk on a treadmill. 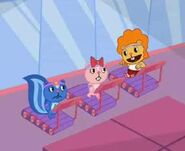 Disco Bear tries to talk with Giggles and Petunia.

They don't want to talk to Disco Bear.

Everybody was Kung Fu Fighting...

They're still not impressed.

"Some water can help me."

"This water is so nice!"

"See? I can keep walking on the treadmill."

This calls for another drink.

I think you know what happens in these situations.

For this he will pay.

"What's with this thing?"

This should help him break a sweat.

The first bolt flies away.

Those bolts weren't even there before.

A simple "Outta my way!" would have been nice.

Toothy getting weak, unaware of his friend's demise.

Sniffles wasn't really that strong to begin with. I doubt he would have been able to lift that thing.

Sniffles is in quite the bad situation. 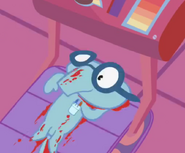 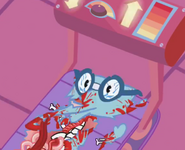 No one will guess what happened here.

What a nice day!

Let's continue this workout outside the gym.

Is Russell the only one seeing this?

Handy would rather break the Fourth Wall than worry about his friends.

A bit of a late reaction from Handy.

"This helmet is so useful!"

"I need to do something!"

Don't be so sure.

Some pieces of asphalt.

Handy smashed in the face.

Did I say Whitney's Milktank? I meant Disco Bear's treadmill!

"Why does this keep happening to me?!"

Depending on how fast Disco Bear was moving, Lumpy might have had time to open that door and go inside.

Disco Bear doesn't realize he could just jump off his mode of transportation.

Lumpy sure can move fast on that wheelchair.

"I still don't know how to stop this thing!"

Lumpy is not fast enough.

The control panel detaches from the treadmill.

And it falls down.

"This all is just a bad dream."

They're on the highway!

"The car is coming closer!"

That was a lucky break.

That car was so close!

The car is about to bump into the tree.

Cuddles before his demise.

"Well, Lumpy, get ready for the worst part."

The two get hit by a few branches.

"I'm sure this will all end soon."

And now they must avoid hitting this.

Lumpy and DB see the wall.

"There's only one way to stop this."

Such a painful way!

Lumpy trying to stop his wheelchair.

He's gonna feel that in the morning.

Old Handy may be gone, but now Lumpy can take his place.

The left hand flies away.

And the right hand also flies away.

"No, they could hit someone!"

Lumpy hits Flaky without being there.

Now there's no way to stop.

Lumpy before his fate.

Disco Bear as he hits the telephone wire.

Flying head! (He lost some weight. Also, that death could happen differently.)

Random scene with The Mole and melons.

Disco Bear's head falls right into the box of watermelons!

Okay, maybe not so random.

The Mole tries to find a watermelon.

Of course he picked that one...

Because The Mole obviously knows what that scale says. I'm surprised he knows where it is.

At least the scale says he lost weight.

That's just because it's only his head.

STV1E2.2 Cafeteria Panoramic View.png
A internal vision along with Disco Bear trying to flirt Giggles and Petunia.
Retrieved from "https://happytreefriends.fandom.com/wiki/Ipso_Fatso/Gallery?oldid=259446"
Community content is available under CC-BY-SA unless otherwise noted.