Instances of English by Character

Most of the time, characters in the series can only speak gibberish. However, they can sometimes be understood speaking English words (including swear words and their names). They may be understood clearly if they say a small simple word. But when they talk in sentences, one may have to listen very well to translate.

Below are instances where characters appear to speak English words. Mime, The Mole, Cro-Marmot, and Mr. Pickels are not listed because they do not speak. 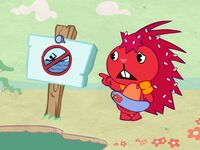 Flaky telling Cuddles not to swim in the lake. 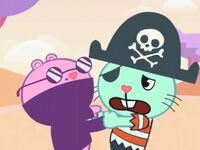 Splendid yelling over his loss.