Images from the episode House Warming.

She runs to it.

Handy prides himself with a nod and a smile.

Flash. Prior to the fire and a split seconds before the explosion. 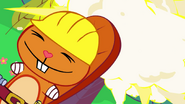 Handy laughs at the misfortune of others.

"What was that?"
Goof #8: Petunia disappears.

He tries to grab the hose.

Handy tries to find another way to save Petunia.

This bucket whose contents are unknown to you.

He kicks the bucket.

I have a feeling that wasn't water.

The fire is much bigger than before.

The gasoline bucket. (What use does that have in building a tree house?)

Handy has no choice but to use his boot to stomp on Petunia in order to put the fire out.

Handy stomping on Petunia to put out the fire.