View source
watch 01:36
We're Getting Mutants in the MCU - The Loop
Do you like this video?
Play Sound

Happy Tree Friends (Commonly abbreviated to HTF) is a Flash cartoon series by Mondo Mini Shows, created by Kenn Navarro, Rhode Montijo, and Aubrey Ankrum, and developed by Montijo, Navarro, and Warren Graff. Since its debut, the show has become a popular internet phenomenon and has won a cult following. As is indicated on the official site, the show is "not recommended for small children". Notwithstanding the cute appearance of its characters, the show is extremely violent, with almost every episode featuring blood, gore, and violent deaths, to the point of being taken off the air in Russia. While the violence of these deaths is comparable to that of "The Itchy & Scratchy Show" (the short cartoon featured on "The Simpsons"), the portrayal of death in Happy Tree Friends is more graphic and anatomically correct, depicting bloodshed and dismemberment in more vivid, exaggerated detail. The show is nearly free of dialogue; however, when the characters do speak, their words are severely garbled. Though it is obvious what each character's reaction is, their words can barely be understood. Exceptions to this are Pop, Lumpy, and Disco Bear; they have garbled speech as well, but can actually be understood on most occasions. According to the website, the idea for Happy Tree Friends was conceived by Rhode Montijo when he drew a yellow rabbit, slightly resembling the character Cuddles, on a piece of paper and wrote "Resistance Is Futile" underneath it.

While working on Mondo Mini Shows, Rhode Montijo drew on a little piece of scrap paper, a character who would later become Shifty. He then drew a yellow rabbit that bore some resemblance to Cuddles, on a piece of paper and wrote "Resistance Is Futile" underneath it. The drawing (of Cuddles) made several employees laugh. In 1999 Mondo gave Aubrey Ankrum, Montijo, and Kenn Navarro a chance to do a short for them. They came up with a short named Banjo Frenzy which featured a dinosaur (an earlier version of Lumpy) killing three woodland animals (earlier versions of Cuddles, Giggles, and Toothy) with a banjo. From there Mondo gave them their own internet series, which they first named it Star Wars, only to be changed to Happy Tree Friends for obvious reasons. They got new writers and animators to work on the show.

Shortly after its original debut in 1999, Happy Tree Friends became an unexpected success, getting over 15 million hits each month, and being shown in film festivals. In some countries, the episodes were shown on television. They could be seen on MTV and Comedy Central channels in Europe and Latin America, the Czech Music TV Óčko (again in 2012 - 2013), the Greek Mad Music Channel, the Russian 2x2 channel (until it was taken off the air due to controversy), the Canadian television channel Razer (later MTV2), the American television channel G4, and on the Australian Special Broadcasting Service (SBS) network. On June 10, 2005, the shorts began showing during G4's "Attack of the Show!" A series, Happy Tree Friends and Friends, then began to air on August 29, 2005, as part of the late night the channel's Midnight Spank block. The series also features Harvey Birdman, Attorney at Law, Retarded Animal Babies and Angry Kid. The series was then reformed into its own show, rather than as a part of a compilation as before. Happy Tree Friends has also gained a collection of Audibles and an "IMVironment" for Yahoo!'s instant messenger. It is featured on many websites on which flash cartoons can be watched, such as Newgrounds, YouTube, Atom Films, and the official Happy Tree Friends website. During select 2007 Ozzfests, some Happy Tree Friends episodes were even shown on the big screen. Encouraged by the show's success, its creators have released multiple DVDs containing the episodes shown on the website and in the TV Series (see below) and others that have not been released. Happy Tree Friends is currently one of the most downloaded iTunes podcasts and over 1,000 fan-made videos have appeared on YouTube.

Happy Tree Friends episodes have begun airing on American television again as of April 2019, as part of The Mondo Animation Hour series on the El Rey Network.

Happy Tree Friends gained its own TV show in 2006, and it was first shown at Comic-Con with some of the segments being shown on the website a few weeks later. The Happy Tree Friends TV series premiered on September 25, 2006 at midnight (Eastern Time) on the original incarnation of the G4 network. Each half hour episode of the TV series contains three 7-minute segments, with 39 segments having aired across 13 full episodes. Reruns would later air on MTV in 2007. The show also aired in Canada on Razer and City, MTV and Comedy Central channels in Europe and Latin America, MTV and Animax (now Sony Max) in South Africa, MTV, Comedy Central and FX in Asia, HBO Comedy, and MTV and Paramount Comedy 1 (now Comedy Central) in the UK. The series was also available on Netflix until 2018 and has been available on Crunchyroll since 2015. The series was rated TV-14 on G4 in the US for "intense violence", while on Netflix, it was rated TV-MA. Crunchyroll rates it the same. TV Series was banned in Russia for being too violent and gory "for the kids show".

All of the show's main characters are anthropomorphic woodland creatures. Many of them show two front large buckteeth when they smile. All of the Happy Tree Friends, with the exceptions of Lumpy, Mr. Pickels, and Sniffles, have the same pink Care Bear or Care Bear Cousin heart-shaped noses. In early episodes, most characters played the roles of children doing childish games. However, as the series progressed the age concept was dropped, and now characters act variously like children, teenagers and adults in different episodes. The only characters who are unaffected by this concept are Lumpy, Handy, Disco Bear, The Mole, Cro-Marmot, Lifty, Shifty, Pop, Cub, Flippy, and Splendid, who always act like adults (except for Cub, who is always a child) respectively. At the beginning of each episode, the characters are typically found in everyday situations. However, these situations always escalate into violence and the inevitable deaths of those involved and/or innocent bystanders, mostly because of very unfortunate, surprising accidents with otherwise harmless instruments. The show's characters sometimes appear not to notice other character's deaths/injuries, despite clear indications (such as blood coming out of the latter's mouths), or they seem to quickly overcome their fellows' deaths. The only regular episodes where none of the characters died were Nuttin' but the Tooth, Out on a Limb, Dream Job, and House Warming. Other than those, every episode has had at least one death. Kenn Navarro has stated that, despite all of deaths in the show, no character is going to be killed directly by a gun as that would be "too easy".[1] The continuity of the series does not seem to be affected by the frequent deaths of the characters, as they always appear alive and well in episodes subsequent to those in which they were killed.

Each episode starts with introduction credits resembling a children's book, which portray the show's logo, the episode's name, which is usually a pun, and cast. Internet episodes have a typical duration of less than three minutes. Usually only a few of the characters are used in a single episode, but occasionally larger episodes have been released where most of the characters appear. TV episodes last about half an hour, having three segments of about seven minutes. Each episode ends with a moral that has some (or sometimes not) connection to the story.

Although most of the characters are mammalian, there are few that are not. Those characters are Sneaky, Mr. Pickels, The Ants, Man-O-War, Webster, and Tick-Talk. This leaves the possibility that more non mammalian characters will be featured in future episodes.﻿

Fall Out Boy's music video for "The Carpal Tunnel of Love", which has been released in 2007, is an episode of Happy Tree Friends. Fall Out Boy is featured in the music video, appearing as cartoon bears, along with Cuddles, Giggles, Nutty, Toothy and the Mole. Lumpy causes the death of all the characters in the video, including himself. All of them die the same type of graphic, bloody deaths that are featured in the TV show.

There are 22 main characters (formerly 20 until 2010 when Lammy and Mr. Pickels were added to the show) in the Happy Tree Friends series, all of which have unique personalities and appearances, but there have been many 'minor' characters that have appeared on the show, some appearing many times and some have only appeared once. 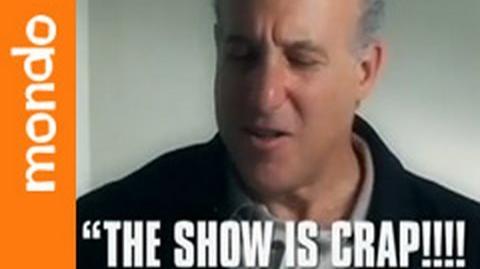 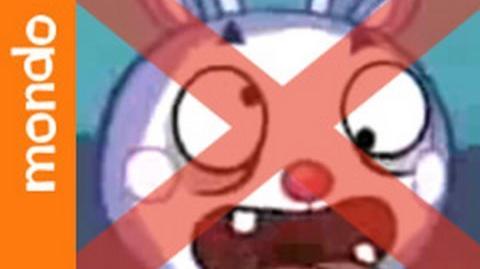 Many parents were concerned about the graphic content of Happy Tree Friends. One parent even complained about the show in a letter to the Washington Post when she saw her 6-year old son watching the show. The warning "(CV CARTOON VIOLENCE Not recommended for small children or big babies)" is displayed in two places on the home page of the Happy Tree Friends website in very small type in the bottom left hand corner, and in larger, but subdued type on the right hand side under the bulletin board section. Neither the "About the Show" nor the FAQ page indicates that the show is not appropriate for young children. However, the episodes themselves contain the warning in large font before the cartoon begins. In February 2008 Russian Media Culture Protection Department (Rossvyazohrankultura, a regulatory body for TV in Russia) issued warnings about Happy Tree Friends and The Adventures of Big Jeff, claiming that the shows "promote violence and brutality, harm the psychic health and moral development of children, attack the social morality; all of this being a violation of license agreement". The department warned the 2x2 TV Channel, which broadcasts the show, to remove it from air to avoid legal issues. The channel appealed to the evaluation ordered to Versia company (versia.org), which denied the accusations.