Images from the episode From A to Zoo. Note: All images are put in order.

A trip at the zoo.

Lumpy the bus driver and counselor.

Cuddles and Petunia look excited. Flaky regrets signing up for the trip.

The only time Sniffles looks normal throughout this episode.

Just look at that, it's terrifying!

Seriously, look at that abomination he calls a face!

Oh, take them to see the sharks!

The kids run off.

That's not a good idea.

They shouldn't be teasing animals. Especially since they ARE animals.

"What should I do with this camera?" 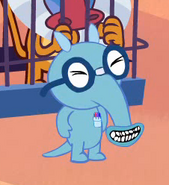 What an ugly face!

Sniffles gets closer to the cage.

This photo would have been better if they were smiling.

It's the circle of death!
And it scares us all...

Lumpy apparently knows to protect his face and eyes, but no one told Petunia.

This baboon hates cameras. A lot.

Lumpy proceeds to blow a dart.

Baboon: I KNOW YOU ARE THE OWNER OF THE CAMERA! NOW DIE! DIE!
Death: Sniffles

The dart hits Petunia, who is about to fall into the snake exhibit.

The dart falls down Lumpy's gullet.

Are all the zookeepers on break or something?

A fight with the snake.

That snake looks really out of shape.

I can only imagine the look on the zookeepers' faces when they go to check up on that snake. 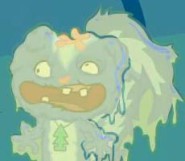 Was murder really worth it to save THIS?
Death: Petunia

Cuddles and Toothy find another animal to torment.

The rhino in the episode.

It'll take more than a stick to bother this guy.

A spear? And I thought Flippy was the only psycho around here.

Toothy asks for a lift.

"Why do I have to do everything myself?"

Turn your back for one second.

Lumpy doesn't even realize that Toothy is DEAD!
Death: Toothy

"This box should solve everything."

What could be spooking Flaky?

Eek! A chick!
Alektorophobia at its finest.

Just like what happens to the other cute and cuddly animals here.

Flaky upset that Lumpy killed the object she was afraid of.

What are you so upset about? You're scared of a little chick, but you're even more scared now that its dead? Really?

The Chick Massacre of December 2005. (Colorized)

Neither of them is getting any sleep tonight.

How did he get out?

Cuddles bumps into the helium tank.

The balloon nozzle stuck in his eye.

One of these balloons is not like the rest.
Death: Cuddles

The baboon leaves his crime scene.

Lumpy finds a way to cheer up Flaky.

Lumpy had a famous balloon-vending career.

When will she ever stop crying?

I guess balloons are the solution to everything.
(Goof: One of the dead chicks in Flaky's quills has their head and body detached from each other.)

Goof: Lumpy's antlers both point up.

On this day, Flaky vowed never to visit the zoo again.

Time to check on the students again.

How do you think Petunia got on the bus?

Time for a disguise.

Yeah, that disguise would fool anyone. And I spot another goof.

Lumpy certainly fell for the trick.

This is the cutest smile Lumpy has ever made! ;) 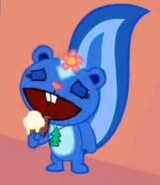 Petunia before receiving a face full of glass. 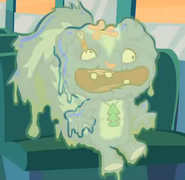 Petunia at the end of the episode.

Retrieved from "https://happytreefriends.fandom.com/wiki/From_A_to_Zoo/Gallery?oldid=337575"
Community content is available under CC-BY-SA unless otherwise noted.