Start a Wiki
watch 01:50
The Loop (TV)
Do you like this video?
Overview
Gallery
Trivia

Images from the episode Flippin' Burgers. Note: All images are put in order.

A so calm day, what could go wrong?

Another day of good burgers by Petunia.

Cuddles about to squirt some ketchup.

Flippy about to flip-out.

"I can't control myself!"

The background image transforms in Giggles covered of blood.

That is so familiar, however went of popping noises for gunshots accidentally caused by balloons.

Cuddles enjoys being there. 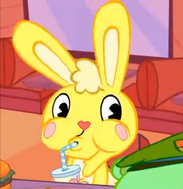 The arms of Cuddles are attached to his cheeks (East is fixed in the DVD).

"I ordered fries, not a shake!"

"Hold on, Fliqpy, let me finish my shake first."

Cuddles is attacked. And where are Cuddles' cheeks?

"No!" But seriously, where are the cheeks?

Cuddles tries to save himself.

Cuddles sucking his blood back into his body, but doesn't work.

Giggles after one of the weirdest deaths.

Giggles about to fall down.
Death: Giggles

If you listen closely, Petunia clearly says "OH MY GOD!"

"I only like good fried food."
Death: Petunia (she's going to be dead)

A Generic Tree Friend about to crash into the signboard.

The Generic Tree Friend crashes into the signboard.

Well, they didn't quite go in.
Death: Generic Tree Friends

Petunia's body should be near the grill...

He just destroyed the entire resturant as quickly as the fries landed on the floor.

"What's that?" Flippy's back though.

Unused scene where Fliqpy kills The Mole.
Add a photo to this gallery
Retrieved from "https://happytreefriends.fandom.com/wiki/Flippin%27_Burgers/Gallery?oldid=334325"
Community content is available under CC-BY-SA unless otherwise noted.