Happy Tree Friends has gained a cult following, and thus, has many fans. Shortly after its internet debut in 2000, Happy Tree Friends became an unexpected success, getting over 15 million hits each month. It is one of the most downloaded iTunes podcasts. There are also many Fan Sites and Forums for HTF.

Fan Art is art drawn by fans of Happy Tree Friends. A wide variety of Fan Art has been released. Some artists make their own characters up (Own Creations or OCs). Many works consist of either canon and/or OC characters falling in love.

Fan art is when fans of Happy Tree Friends create pictures (or art) of the show. Some of them draw existing characters, while others will create their Own Creations. Two of the most prominent themes in fan art are characters killing each other and characters in relationships, such as getting married or having children. Sometimes the characters are drawn in a certain episode, particually The Carpal Tunnel of Love. A popular style of Fan Art is to draw the characters as real people, usually in an anime type style.

Couplings are a form of Fan Art where the creator will put two characters together, usually as lovers (there have been examples of rivals as well, such as Flippy and Splendid). Examples: 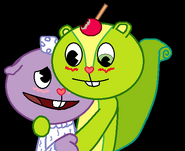 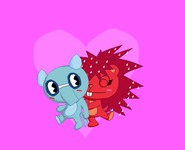 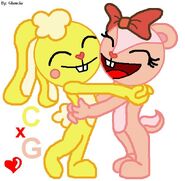 CuddlesxGiggles, one of the most popular pairings.

Many fan made characters are based on already existing HTF's and are shown as being coupled with them. Most of these are called "Mary Sues" and hated by many (most likely because of how uncreative these OCs tend to be). Some examples are 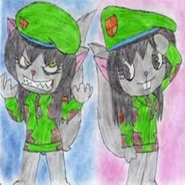 Ale being shown with a Good and Evil side like Flippy. 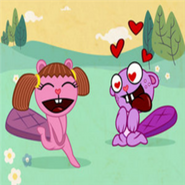 Some more criticism of HTF Fan Art is that many fan made creations are not very HTF like. Some OC's are too human like as some have hair, glasses, full sets of clothing, and even braces. Some even have human Body Parts that are not normally seen on HTF.

Others can be too creative such as having multiple battle scars in different colors, the eyes being both different colors, and even the nose and teeth being changed. There's also hybrid OC's that usually consists of two different mammals mixed together. EX: bunny/chipmunk, beaver/raccoon, skunk/squirrel, etc. They're usually seen as an offspring of two already existing characters. 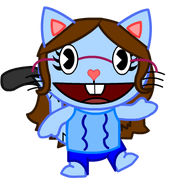 "Neena" a HTF with long hair, glasses, and a full body outfit.

On YouTube thousands of Happy Tree Friends fan videos have been created. A lot of the videos consist of snippets from different episodes being put together with a song played over the top (also known as an "amateur music video" (AMV), or a montage). Such videos are usually referred to as video clip. Other types of fan films include various fan art pictures put together in a movie. Some have even gone as far as to create their own animations.

These are not necessarily episodes that have been put into nay sort of video, but they are concepts and ideas created by fans who want to get in on the action. This can range from deaths and kills, to entire episodes in scale.

The Fan Fest was a category on the Happy Tree Friends website. It mostly consists of YouTube Fan Videos, however some are by Mondo still.

Retrieved from "https://happytreefriends.fandom.com/wiki/Fandom?oldid=306544"
Community content is available under CC-BY-SA unless otherwise noted.