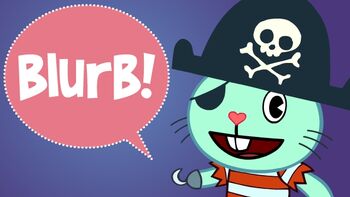 These are episodes where the original episode has been done over with a series of speech bubbles/boxes containing text, either a joke, a random statement, a goof, or a fact relating to the scene. Additionally, the episodes that originally were produced in 4:3 format (standard definition); when they are blurbed, they are remade in 16:9 format (high-definition). NOTE: The episodes listed below are ordered by their date of release.

A smoochie is an interactive video that includes one character where you give him/her something. You're given three options of what you can give to the character and you can choose any of them, but all of them result in the character dying. After a few seconds of inactivity, the character will do one or two things, such as laugh or say hello.

Kringles are special short holiday messages (set during Christmas) released as parodies of typical animated greeting cards. There are currently ten Kringles.(Note: The last two Kringles of the list are, respectively, from the very beginning and end of the Winter Break video.)

A spin-off about Flippy, Splendid, and Buddhist Monkey starring in an action series. Flippy stars in W.A.R. (Weapon Animal Regiment) Journal. Splendid appears in Splendid's SSSSSuper Squad. Buddhist Monkey returns to star in more new episodes. The Mole was listed as a character, but he doesn't appear to have a connection with Ka-Pow! now, and, as a note, his episode, Mole in the City, debuted way before Ka-Pow! even existed.

The graphics and animation of some of the later shorts (specifically Happy New Year to Tunnel Vision) were originally produced for G4's Happy Tree Friends and Friends in 2005, with the branding replaced in the Break shorts.

Love Bites are Valentine's Day-themed short episodes featuring romantic relationships between two characters (male and female), that eventually go wrong with one or both members of the couple getting injured and/or dying. Just like with Kringles, each Love Bite contains a message that it's related to the theme of the short.