Images from the TV episode Easy For You to Sleigh.

Let's find out what Pop and Cub are doing. Something tells me it isn't responsible parenting on Pop's behalf.

Pop inside the house.

Cub is better at watching Pop than the other way around, that's for sure.

Pop, are you cooking?

"Oops, forgot about the turkey!"

"It's going to be delicious!"

I don't want that turkey. It's all burned.

A bit of smoke inhalation.

It's good that Pop and Cub have one.

And it's also good that it works.

The noise hurts Cub's ears. Actually, he doesn't seem to mind at all.

"Hey! I'm the only one allowed to hurt my son!"

Meanwhile, on the roof...

"I bet you there'll be lots of cash for us to splash!"

Like normal Santa, but they take things instead of leaving them.

"Just look at that!"

With a beautiful star on the top!

Lifty likes the sight of that tree.

Forget the other valuables.

In the process of stealing...

Aren't they stronger than this?

Is that even possible?

It's a cartoon - everything is possible!

Just take the star off. Did you really want the whole tree?

Pop tries to make a fire.

"I finally made a fire!"

Pop wants to make their house a little warmer.

In his defense, who actually looks up the chimney?

The house is smoky again!

Pop and Cub (before death).

Pop and Cub are sleeping.

Pop, you shouldn't have done that.

The shot before Pop's death.

Pop and Cub's death in this episode.
Death: Pop, Cub

They found a new house to rob.

The entrance into the house.

"This time we're sure to get something."

Mime turns on the light.

Imaginary water is so refreshing!

An invisible version of Lifty and Shifty's favorite furniture.

Makes you wonder what he's seeing.

And puts some things into it.

How does he not notice them though?

He didn't forget to turn off the lights.

"We're going to get so many valuables!"

This is where it was, right?

Air is heavier than it looks.

Until the air is in a bag.

"What do you think?"

Lifty has another idea.

Whose house is this?

This house owner is loaded!

"What can we find here?" 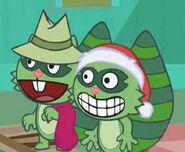 Shifty and Lifty are very happy!

Such a big TV!

This stereo system must be very expensive.

Flippy sleeping it's so cute!

They look at Flippy.

They're gonna steal some expensive things!

They should be quiet if they want to steal something.

That didn't wake him up, did it?

And again they're too loud.

The TV's as heavy as Mime's safe.

Shoot, he's wired to be woken up by that!

He was very tired yesterday.

Yeah, he's not gonna wake up.

Are they going to steal everything?

You can just do anything now.

Flippy will be angry.

Lifty and Shifty preparing for something!

I hope he won't wake up.

Welcome back to the world of the living, Flippy.

Remember that Flippy's a veteran.

Not the best way to wake up.

He wasn't tied up in the war, was he?

You're in trouble now, Flippy...

I don't think Fliqpy even noticed the ropes.

Scared Lifty and Shifty. (You seem to have enjoyed observing Flippy flipping out, right?)

RUN THE OTHER WAY!

"Run for your life!"

"...I see something expensive!"

Shifty's a master at this.

Really? You went back for the sand?

"I need to do something or I'll die!"

Shifty should have walked around that trap.

That dust is dangerous!

That has to hurt!

Christmas lights, an ornament, and a cookie. Only Fliqpy.

Talk about a bloodthirst.

"We can escape now."

He's quite fast after such a big injury.

Lifty jumps through the window.

But if it works, it works.

He's going to check his safe.

A GIF image of sleeping Flippy.
Retrieved from "https://happytreefriends.fandom.com/wiki/Easy_For_You_to_Sleigh/Gallery?oldid=334971"
Community content is available under CC-BY-SA unless otherwise noted.