Images from the TV episode Don't Yank My Chain.

Handy went through there.

The Mole with the map.

Remember when TV Tropes said that Giggles is a chick?

Just Handy doing his Mole impression while driving. Nothing to worry about.

Where are they going anyway?

Shifty and Lifty have a plan to steal Handy's car.

If The Mole wasn't blind, maybe he'd have seen this and alerted Handy.

Objects in mirror may be dumber than they appear.

Shifty gives Handy's and The Mole's ID cards to Lumpy.

Lifty and Shifty disguised as The Mole and Handy. This disguise should fool even the most competent policeman.

Which pair are the imposters?

You and your friend trying to tell that two people stole your car.

Lumpy is far from a competent policeman.

"You have the right to remain silent!"

This face is so familiar...

Knowing Lumpy, he probably forgot to lock the door.

...they still have that weight ball to drag around.

Meanwhile, Lifty and Shifty are still wearing their disguises.

Were Handy and The Mole really the only prisoners here? I don't think Lumpy's doing his job very well.

It takes him a few seconds to figure out the cell is empty.

The duo makes a run for it.

They couldn't have chosen a better spot to rest.

Especially with that thing.

The Mole has elastic leg syndrome.

Tumbling down the cliff.

That fall clearly did a number on Handy.

What could possibly go wrong?

This can only end so well...

Emphasis on the "well" part.

His teeth sure come in handy. But the name Toothy has already been taken.

Handy falling down the well.

Since when was Cuddles a farm boy? By that look in his eyes, he has amnesia.

Nothing odd about collecting water from the well.

How would you react if you found this thing in your local wishing well?

Lumpy using an important piece of evidence to blow his nose. Better than using it as toilet paper.

And they somehow escaped.

On the run again.

Cuddles returning the check on those people he saw in the well, not seeing that they left.

Lumpy's gonna save you.

This couldn't have felt well. 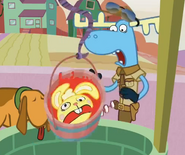 Must be really gross if it's enough to drop the head back in the well.

I fail to see how this can't get any worse.

Lumpy's still hot on their trail.

Handy and The Mole get away.

Being on the lam is boring once the terror subsides.

He should probably be paying attention to what The Mole is doing.

How could they have possibly gotten to the surface with that weight?

Still waterlogged, I see. Get it?

Handy discovers his home has been destroyed.

And he must avoid a fate he will endure much later on.

Handy plans to have the saw cut their chain.

Handy and The Mole trying get rid of the weight! The Mole's clearly holding it up.

This plan was easier said than done.

And only one of these guys can talk.

He died... couldn't have survived that.

Handy thinks of how to reach the buttons.

Handy mourning the death of his partner.

After dragging a body for who knows how many miles.

Not a good idea!

"Daddy! Look outside! There's a guy with no hands attached to the train!"

Handy being dragged along by the train.

"Look at him suffering out there!"

There goes his tail.

Pop continues being oblivious to his son watching cartoon violence.

Just The Mole's carcass being clubbed by the weight ball.

Nothing to do now but enjoy the scenery.

Handy tries reaching the chain with his nubs.

It could always get worse.

Oh no, a tunnel! Handy's terrified of the dark.

And there goes his eyes.

This is a bit disturbing.

Congrats, Pop! Your son will grow up to be a psychopath.

The carjackers continuing their victory with funny celebratory faces.

Then the car they don't own stops working.

Maybe they should have waited until after it was filled up at the gas station.

Lifty and Shifty too busy arguing to notice they're in the middle of a railroad crossing.

All aboard the karma train!

Almost forgot about that ball.

Talk about a "crushing defeat".
Retrieved from "https://happytreefriends.fandom.com/wiki/Don%27t_Yank_My_Chain/Gallery?oldid=259435"
Community content is available under CC-BY-SA unless otherwise noted.