View source
watch 01:36
We're Getting Mutants in the MCU - The Loop
Do you like this video?
Play Sound

This is a list of DVDs released for Happy Tree Friends.

The First Blood DVD was released on February 18, 2002[1]. It has the following regular episodes, special, and exclusive content: 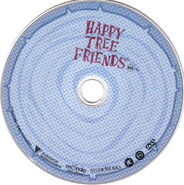 Select releases of First Blood also included a second disc titled "Bonus Pack," which was advertised in a television commercial for First Blood. Its contents are currently unknown.

The Second Serving DVD was released on October 14, 2003. It has the following regular episodes, special, and exclusive content:

The DVD with the disc itself

The Third Strike DVD was released on August 3, 2004. It has the following regular episodes, special, and exclusive content: 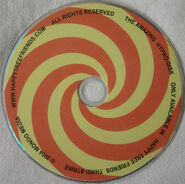 Four Blood Sample Sets were released in 2004 and include samples of: 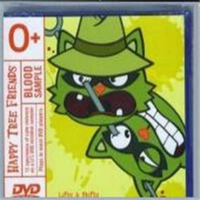 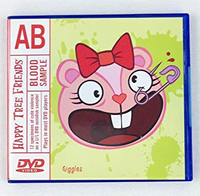 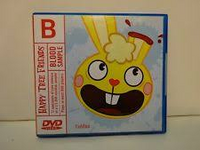 Blood Sample B (US release) 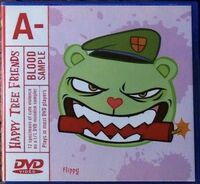 Blood Sample A- (US release)

Blood Samples A- and B (German releases)

The Overkill DVD set is a 3-disc set that was released on October 4, 2005 and includes:

The bonus episodes are as follows:

The Winter Break special was released on DVD on October 4, 2005 and features the following:

A box set containing all 4 volumes of Season 1 of the TV series was released on January 8, 2008. The set comes with a sticker sheet. 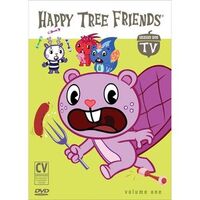 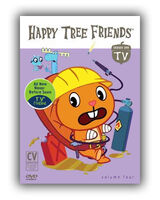 Volume 1 showing Lumpy and The Mole. 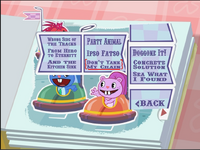 Bonus Features menu showing Lumpy shutting a door and Giggles getting crushed by it.

The menu opens to another menu the same as the first one.

Volume 3 Menu showing The Mole as a hairdresser.

Episode selection menu with Giggles and Petunia about to go in hair dryers. 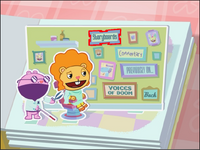 Bonus Features menu with Disco Bear about to have his hair cut by The Mole.

Volume 4 Menu showing Handy holding a sign in his mouth with a number 5 on it.

After clicking an option the text changes. 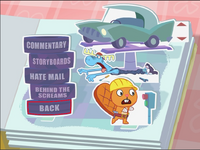 Bonus Features menu with Handy trying to stop Lumpy from being crushed by a car.

Storyboards menu showing Petunia needing to use the bathroom.

Lumpy fixing a blockage in Petunia's toilet, which is a reference to Wishy Washy.

The ~Everyone's Blood Edition~ (~みんな大流血編~) DVD Book was released only in Japan on December 2012. It contains 19 episodes from the TV Series.

Despite Lammy being on the front cover, she never makes an appearance in the TV series, as it aired before 2010.

The ~Always Panicky ☆ Edition~ (~いつも大パニック☆編~) DVD Book was released only in Japan on July 2014. It contains 20 episodes from the TV Series.

The Complete Disaster DVD set was released on November 5, 2013. It is a 4-disc collection which includes all 13 of the TV episodes and 75 of the first 78 Internet episodes (Spin Fun Knowin' Ya to No Time Like the Present; three Internet episodes are missing; see Trivia section below) presented in widescreen.