Start a Wiki
watch 04:10
The Loop (TV)
Do you like this video?
Overview
Gallery
Trivia

Black-and-white version of Cro-Marmot from Dino-Sore Days. (Due to him being frozen)

Cro-Marmot in Snow What? That's What!.

Cro-Marmot as a competitor in Wipe Out!.

Cro-Marmot with Mime in Brake the Cycle.

How Cro-Marmot sees the movie. 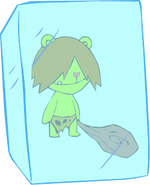 Because ice isn't slippery at all.

Enjoying the coaster with almost everyone else.

Even Cro gets in on the fun.

Better pat him down.

"Got anything in that block?"

How does he answer the phone? 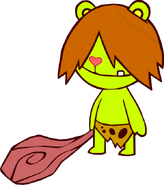 Cro-Marmot out of his ice block.

He may not look like much, but Cro has a secret weapon when it comes to water...

How does he do it? 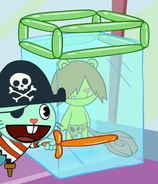 Cro-Marmot is chewed apart by a Pterodactyl and fed to it's babies.

Cro-Marmot enduring one of his three confirmed deaths (besides Class Act (Internet) and Dino-Sore Days (Irregular).

Two people who for some reason don't notice the torture that will occur to their friend.

Perfect job if you're encased in ice!

Cro-Marmot likes what he sees.

Why settle for carrion...

...when you can eat something fresh?

The dinosaur is not amused.

"Why does this taste so fresh?"

"Whoops, sorry about that!"

Never thought you'd see this happening to Cro-Marmot, did ya?

God, it was just your tail.

"I'm getting the heck out of there!"

Need to get this just right.

Cro, Cro, Cro of the jungle! Watch out for that...

Something tells me this one isn't friendly either.

That's the end of Cro-Marmot... well, before he came back and got frozen tomorrow.
Death: Cro-Marmot

So, was this planned?

Him as a butcher.

Retrieved from "https://happytreefriends.fandom.com/wiki/Cro-Marmot/Gallery?oldid=351534"
Community content is available under CC-BY-SA unless otherwise noted.