View source
watch 02:24
Wiki Targeted (Entertainment)
Do you like this video?
Play Sound

A continuity error is defined as any time in a piece of fiction where an event in the plot (whether small or large) contradicts information previously received. It has been stated that Happy Tree Friends relies largely on an absence of plot continuity to function. This allows them to kill any of the characters and still have them available to use in later episodes. However, in addition to characters coming back from the dead and/or miraculously losing major injuries, there are many other cases of continuity errors from episode to episode and even some within the same.

Cuddles having a seizure.

Cuddles not having a seizure.

Cuddles still not having a seizure.

Not sure if this counts as an "allergic reaction" or if it's just swelling.

Toothy gets stung by several bees in Aw, Shucks!.

An example of Lumpy's large brain.

An example of Lumpy's tiny brain.

Proof that Lumpy has no teeth in his snout. 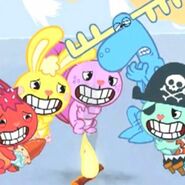 Lumpy miserable in it.

Lumpy after falling out of a plane.

Lumpy after falling out of a tree. Also, an example of Lumpy's large brain. 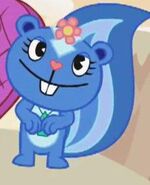 Petunia having a problem with her body covered in sludge...

...but here, she has no problem with the contaminated water as well as her dirty mouth...(Look, I said it before & I'll say that again, SHE, WAS, DEHYDRATED!)

...now she has a problem with a bacteria splatted on her chest...

...now she has no problem of her face and her hand covered in grape juice altogether.

Handy's hands are cut off at the wrist.

Here his arms are cut off at the elbow.

Handy's hardhat can withstand this...

Nutty having a bowl of fruit in his kitchen.

Nutty standing in line at a place that doesn't sell sweets.

Nutty after falling on face into a concrete bridge.

Nutty after tripping onto the grass. Really Mondo?

I guess Sniffles got plastic surgery over the years.

My, Sniffles, what a long tongue you have.

Sniffles has nails as seen in Tongue in Cheek

Most people would've given their breath up at this point.

Could his lack of a torso be the cause of him drowning so fast?

Flaky afraid of a chick.

Flaky not afraid of an eaglet.

Flaky's as comfortable as Flaky gets with heights.

Something tells me Flaky isn't a fan of skiing... 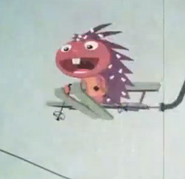 Flaky is calm about giving Flippy a knife…

Flaky freaks out when Flippy has a razor.

Yet here he noticed he cut his foot.

Yet he misses Giggles' screams.

But can't even sense Lumpy's hand?!

Here, Russell's peg legs are being pulled but are not falling off.

But now he is able to take off his peglegs.

Cro-Marmot and his ice block have this kind of effect on water.

And this effect outside of it.

Cro-Marmot and his ice block have no effect on water.

Fliqpy becomes Flippy because water was dumped on his head.

Splendid dies from a school explosion...

...but can survive the apocalypse.

A much smaller inanimate Mr. Pickels.

Russell with a modern smartphone/iPhone, which came out around 2007.

A beach shown in or very near town.

Giggles lives with her mum in a tree (Helping Helps).

Giggles lives with Nutty in house (Dunce Upon a Time).

Giggles lives alone in house which Handy and other friends build her (Home Is Where the Hurt Is).

Petunia´s house (Wishy Washy) - It looks similar to her house in Hello Dolly except it has branch.

It´s normal that in fall trees has no leaves... (Remains to be Seen).

Leafy trees in winter... really? Are you sure? (Tongue Twister Trouble).

Eh... I said NO leaves in WINTER... Very strange nature in the HTF universe... (Stealing the Spotlight).

Looks like nature forgot about trees with leaves this fall AGAIN... (Stealing the Spotlight).

Flaky is somehow still alive after having been skinned.

Meanwhile, Mime is killed off by having his skin scrapped to pieces.

Meanwhile, Cub's lower half have been shredded off, but that ironically the least of his concerns.
Community content is available under CC-BY-SA unless otherwise noted.
Advertisement