Giggles folds a paper airplane with sheets of paper on the ground on a windy day. She then flies the paper plane to test it out. It swoops around and slices Giggles' eyes. 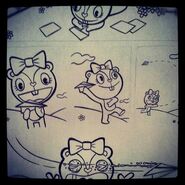 Retrieved from "https://happytreefriends.fandom.com/wiki/Comics?oldid=358597"
Community content is available under CC-BY-SA unless otherwise noted.