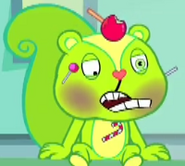 Nutty's Feels a Roar from His Belly.

Toothy's new "eye" and a fancy moustache from Lumpy.

This can was filled with dust!

This was a confirmed death.

What doesn't kill you...usually succeeds in the second attempt.

Nutty discovers the one thing that can break a jawbreaker. Too bad he can't tell anyone about it.

Panoramic view of Nutty's house (interior) from the same episode.
Add a photo to this gallery
Retrieved from "https://happytreefriends.fandom.com/wiki/Chew_Said_a_Mouthful/Gallery?oldid=259776"
Community content is available under CC-BY-SA unless otherwise noted.
FandomShop DC Trivia GalaxyQuest